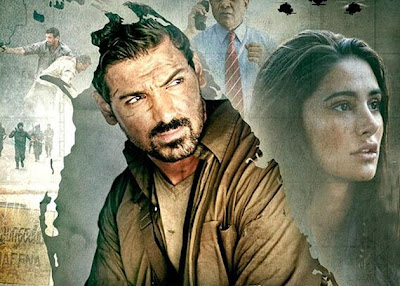 Indicine: Madras Café is perhaps the best spy thriller ever made in Hindi cinema. It keeps its aspirations low and doesn’t overreach. The story moves along fluently and the viewer is not left out, even if they don’t have any knowledge of the time and incidents Madras Café refers to. Madras Café deserves to be seen by the ones who like dark, edgy, realistic films. Rating: 4/5

Bollywood Hungama: On the whole, MADRAS CAFE is an earnest and honest effort, a terrific thriller, with several poignant moments and episodes that leave a stunning impact. It's a film that you should watch because it gives you an insight into an exceptionally pertinent episode of history. If you are in the frame of mind to watch superior quality, sensible cinema, I would strongly recommend MADRAS CAFE to you. Try not to miss it! Rating: 4/5

One India: Madras Cafe is captivating, compelling and engaging throughout. It's a wake up for those filmgoers, who just look upto to a movie for some mindless giggles and laughters only. Madras Cafe exposes the long lost realities and brutal conspiracies in our politics and the sufferings of our fellow brothers during civil wars, that are left back in the dusty pages of history. Rating: 3.5/5

Times Of India: Madras Cafe dives boldly into terrain Bollywood hasn't touched before. Its arsenal features research, respect and bravely, no songs. But it's not arty or preachy anywhere. Its first half is layered, complex trails - leaks, foreign interests, domestic rivals - slowly revealed to Vikram. If you like typical Hindi movie masala, unrealistic action or melodrama, this movie is not for you. Rating: 4/5

NDTV Movies: Madras Cafe is a sinewy and riveting espionage thriller that entertains without having to play to the gallery. Madras Cafe is not your average Bollywood thriller. It crackles with genuine energy and is marked by true empathy for humanity. It is an unqualified triumph. Rating: 4/5

KoiMoi: Shoojit Sircar and John Abraham have teamed up again to come up with one of India’s most bold and matured political thrillers! Designed with a deep rooted sense of urgency, the film builds an overwhelming tale around the darkest phase of the Lankan Civil War that marshal to conclude with a rushing end which we are all familiar with. In between the flashbacks and conspiracies, Madras Café is a film with a gritty, convincing and engrossing plot that will revel in its ability to leave you with an uneasy and helpless feeling! Rating: 4/5

Rediff: After experiencing back-to-back idiocy on big screen, it’s refreshing to return to the theatres for a film that expects you to be educated, informed and attentive. Give it a chance, Madras Cafe deserves an audience. Rating 3.5/5

In.com: Solidly directed by Sircar, who steers clear of typical Bollywood machismo and avoids oversimplifying characters or their motives, the film - at a little over two hours - is a compelling watch. I'm going with three-and-a-half out of five for 'Madras Café'. Until the climate is more conducive for filmmakers to boldly make real-life stories without fear of controversy or censorship, this may be the best way to approach important stories that must be told. Rating 3.5/5

Bollywood Life: The film ends with an intriguing thought, who really won the war. It keeps us pondering for a while that nobody gains at the end of a war, there’s only loss… As the narration ends, the beautiful track Maula Sun Le Re starts playing. Hmmm… Is John asking the Lord to listen to his pleas for his film to work? He surely doesn’t need that for this film to work as it’s the best political thriller that Bollywood has ever seen! Rating 4/5

Mayank Shekhar: This film doesn’t conclusively establish a new angle or fresh motive behind Rajiv Gandhi’s death, besides merely pointing towards western corporate interests. But it makes you search deeper. It’s been over 22 years since. Who the hell gained so much from Rajiv’s assassination? The LTTE is practically defunct now. After the film, we sat and discussed these things for a couple of hours. I’ve bookmarked a few articles on the web already, can’t remember the last time a Bollywood film made me do that. Rating 3.5/5

Glamsham: What is also overpowering and noteworthy is that no single actor stands out in this espionage thriller. All actors are accorded their space and none move out, trying to be first in the race.
Book your seats if you have a taste for history and love for thrillers.
MADRAS CAFE is a definite hit. It may or may not cross the Rs 100 crore mark but where intelligent cinema goes, this one is high up there. Rating 4/5

DNA India: Madras Cafe is not an easy film to make and present. Kudos to producer John Abraham for producing a film, that isn't audience-friendly in concept or genre. The film  is about India's role in the civil war in Sri Lanka that lasted for 27 years and resulted in the deaths of thousands of Tamilians and over 1200 soldiers from the Indian army. If you knew nothing about the war in the neighboring country for over two decades, that will change after you watch Madras Cafe. Rating 3/5

ZEE News: ‘Madras Cafe’ is a must watch for those tired of hackneyed plots and over the top nonsensical dialogues and want more of powerful and impactful cinema on screen. Rating 3.5/5

Indian Express: But it is so rare to find a director and producer-cum-lead -actor committed to making films that are willing to deal with real-life events — Rajiv Gandhi's assassination changed India's tracks in ways we are still dealing with — and say it in a manner that keeps you fairly engaged, that I'd say Madras Café isn't half bad, even if it could have been better. Rating: 3/5