Once Upon A Time In Mumbai Dobara Reviews 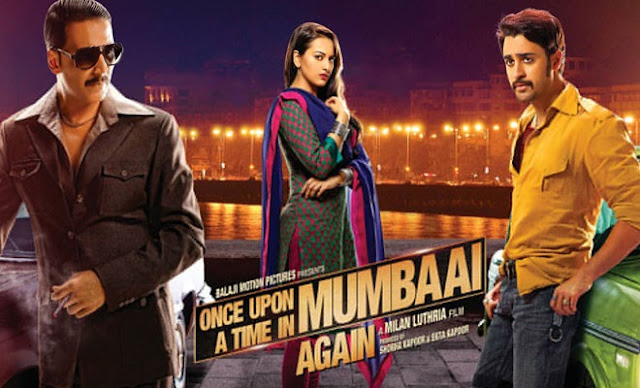 Indicine: OUATIMD is another example of commerce taking over art. The only reason this film was sanctioned was probably to cash in on the cult following of the previous film. OUATIMD does have its moments, but overall the film doesn’t work. It doesn’t come together as fluidly as it could and should have. Rating 2/5

Rajeev Masand: This disappointing sequel to 2010’s Ajay Devgan-Emran Hashmi starrer is constructed around the premise of a love triangle…the laziest love triangle you could possibly imagine. It doesn’t help that writer Rajat Arora, as if to compensate for the flimsy plot, goes into overkill mode with wise-ass dialogues. Imran Khan as Aslam, ostensibly the hero of this film, appears ill at ease rolling those corny lines off his tongue, and resembling a rich urban kid slumming it out as a tapori at a dress-up party. Sonakshi Sinha’s Jasmine has got to be the most pea-brained woman you’ve ever met. Rating 1.5/5

Times Of India: In OUATIMD, a love triangle forms the bloodline of the story, replete with 'donnisms', molls with maal and an overkill of 'loaded' dialogues pe dialogues.This is a love story of a gangsta, it does not reopen dons' crime diaries. The first part is more engaging; thereon, the sluggish pace lacks the same dum. The heavy-duty dialogues (Rajat Aroraa) punch drama in the story, though at times too overbearing. Rating 3.5/5

Raja Sen: Things have gotten far worse this time around, with characters talking exclusively in the sort of aphoristic couplets found on auto-rickshaw stickers. Akshay Kumar makes some of those lines work, but the rest are beyond redemption.For now, a much more relevant question would be just what purpose Imran Khan serves in a movie like TWAT. Sure, Kumar's a bad guy and there needs to be a hero in a film this formulaic, and I get that this film is ostensibly a love triangle, but so entertaining is Kumar's swagger and so feebly does Khan deliver his lines that even if Khan's character were completely excised, it wouldn't hurt the movie an ounce. Rating 2/5

Indian Express: I missed Ajay Devgn and Emran Hashmi of the original, who made credible 'bhais', and carried off those rhyming dialogues. Akshay Kumar lacks menace and quickens only when those glasses are off his face, which doesn't happen too often in the film . After all the shoot-outs and bang-bangs are over, you are left with a film which leaves you with so little new that you wonder if there's any juice left in this style of retro gangsta flick. Or are we heading for a third-time-in-Mumbai-Tibara? Rating 1.5/5

KoiMoi: What’s Good: It’s yet again a Once Upon… story where every line is a punch line and retro look is fantastic with its aroma of nostalgia! What’s Bad: There’s melodrama, overdrama and too much drama. Watch or Not?: Milan Luthria’s OUATIMD lacks the effervescence and naturalness of its prequel. The vibrancy of the script is diluted with hard-to-believe romance, minimal story, the film falters due to lack of action and the calamity that OUATIM reflected in abundance. This one isn’t really a dull bore but fail to spark off the enigma of the former edition! Crime thrillers and love dramas shouldn’t be mingled, it results in an insipid broth. Rating 2/5

Zee News: But the hit formula that they had devised seems to have gone awry this time around. ‘Once Upon Ay Time In Mumbaai Dobaara’ is nothing but an out and out Akshay Kumar film with nothing more to offer. Director Milan Luthria opts for a very conventional treatment to this film. The cinematic liberties taken in the film are anything but acceptable. The hide-and-seek game between the police and the dreadful don is quite unrealistic and it goes without saying that it’s total filmy! Nonetheless, OUATIMD is a tale of a don who wishes to win over the love of his life! Watch it only for Akshay Kumar. Two for this one. Rating 2/5

India Glitz: Apart from Akshay Kumar's dashing looks and performance Once Upon Ay Time In Mumbai Dobaara has nothing to boost on its own as a sequel.. it's an uninspired, boring and highly disappointing sequel you'll ever see. Or not see, if you're lucky. If you love the first film, seriously, do not see this one. You'll ruin two movies at once. Rating 2/5

Bollywood Life: The sequel is painfully over-long and silly. So we strongly recommend that our readers watch the original instead of this two hour-plus unbearable mess Luthria calls a film! As for me, if I see a movie like this dobaara, mera profession bura maan jayega! Rating 1/5

Boxoffice Detail: Excellent direction, winner dialogues, killer Shoaib. Drawback was Imran Khan, character is not for him and a bit draggy 2nd half. Rating 3.5/5

In.com: If anything, ‘Once Upon Ay Time In Mumbai Dobaara!’ is sure to keep boredom at bay. Even though it drags in parts, it's not a bad option for the long weekend ahead. As Imran Khan's character would put it - Yeh movie dekh le, phir thank le aur vatak le. Rating 3/5

Daily Bhaskar: Talking of entries, to be fair the other one, Aslam, had warned you about the film in his first scene itself, “Abhi toh meri entry hui hai. The end aane mein bahut time hai mere dost.” Masla wahi hai (that’s the issue), screw the masala, there are 160 minutes of this to sit through. Rating 1/5

India Tv News: I’ll go with two stars for Milan Luthria’s ‘Once Upon A Time In Mumbaai Dobara’. It’s a dull crime saga with an uninspiring love angle. Look out for some other option this weekend. Rating 2/5