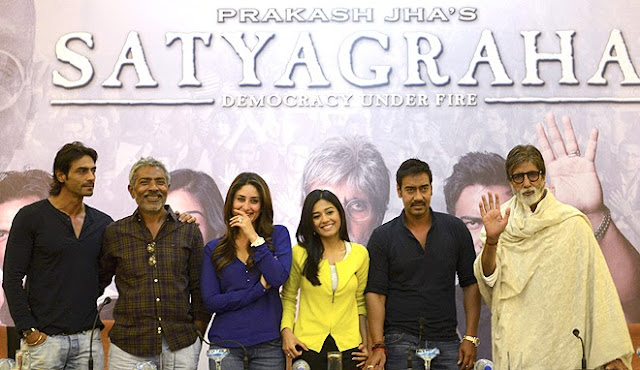 1) Satyagraha Title Song: Album starts with Title Song which is composed by Salim-Sulaiman and sung by Rajiv Sundaresan,Shivam Pathak & Shweta Pandit. It can give you goosebumps. Very Good Song. Rating 4/5

2) Aiyo Ji: Melodious voices Salim Merchant & Shraddha Pandit behind the mike, Song is composed by Salim-Sulaiman again. The song is average in itself, but background beats save it big time. You will enjoy it. Rating 3/5

4) Janta Rocks: Next one in the list is Janta Rocks composed by Meet Bros Anjan Ankit and sung by various artists. It's peppy, full of sarcasm but at it feels average after one point as it's lengthy, though it will surely sound good in the film. Rating 2.5/5

5) Hum Bhole The: This Indian Ocean Number is sung by Rahul Ram,Amit Kilam & Himanshu Joshi. Very energetic number and great use of guitar and drums. Rating 3.5/5

6) Raske Bhare Tore Naina (House Mix): First remix number in the album. Aadesh Shrivastav decided to replace Shafqat Amanat Ali this time. Despite being a remix, this is still melodious and beautiful. Rating 4/5

7) Aiyo Ji (Remix): This is typical DJ version which fails to impress. Rating 2/5