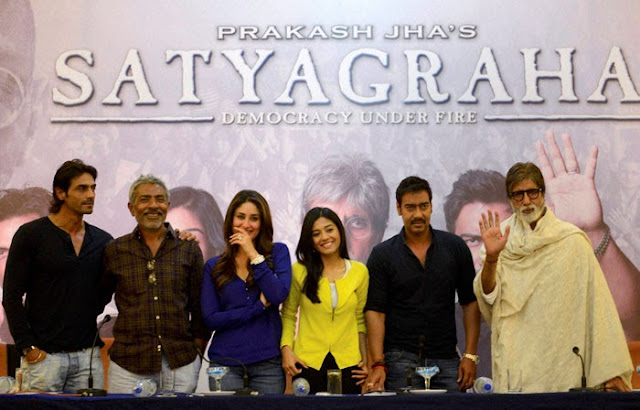 Indicine: Overall, Satyagraha manages to make a mark in your conscience because of the important issues it talks about. If you manage to overlook a few of the film’s logical loopholes, Satyagraha is definitely an entertaining social lesson. Rating: 3.5/5

Bollywood Hungama: On the whole, SATYAGRAHA is an all-engrossing, compelling drama that mirrors the reality around us. In fact, it's yet another brilliant addition to Prakash Jha's credible repertoire, who has created some of the most politically momentous motion pictures. For the splendid drama and the electrifying dramatic highs, I suggest you must watch this hard-hitting fare. Absolutely recommended! Rating 4/5

One India: Satyagraha is neither compelling, nor gripping. Unlike Jha's other hard-hitting political dramas, this one is too light and monotonous. The movie goes on and on with a poor script, at times testing your patience. Nothing can spare you in Satyagraha, until it concludes and you get a breather finally! Rating 2.5/5

KoiMoi: Prakash Jha’s Satyagraha is a weightless film that leaves by a transitory impact on its audiences. Wasting the enigma of such talented bunch of actors, the film with its overbearing story and its erratically structured plot lacks the much needed blaze. Emerging as a warped product of political correctness with an unconvincing climax, somehow the entire product had the stench of unbearable staleness. It wasn’t a terrible film, just not the promising Prakash Jha venture you might have wanted to watch. Rating 2.5/5

Glamsham: Watching SATYAGRAHA fuels in you the desire to pray for a better tomorrow. To pray for better governance, for politicians with no criminal past and a government that is for the people. While the movie does invoke in you some feelings, you do feel cheated that it does not attempt to answer the bigger question. Rating 3/5

Rediff: Clearly inspired by the Anna Hazare movement, Satyagraha attempts to replicate it and explain what went wrong. What went wrong with the film itself, is the delayed climax.
If you have lofty ideas for your country or are just plain sick and tired of the corruption that has crept in, Satyagraha is definitely for you. However, if you follow politics and have had the opportunity to open a newspaper, just avoid it. Satyagraha attempts to speak about important issues but ends up over-simplifying them. Nevertheless, it is a good attempt. Rating 3.5/5

Times Of India: Satyagraha deserves an extra half-star for capturing corruption from root to branch - a government babu complains, "Yahan toh table ka bhi bhaada dena padta hai". Showing true Satyagraha has no short-cuts, it also shows solutions glimmering ahead, as ephemeral, yet powerful as a rainbow cleansing the dust.
Note: You may not like this movie if you avoid socio-political realities in cinema. Rating 4.5/5

Navoday Das: Satyagraha was overdramatized a bit in parts but it was good nonetheless. A crispier screenplay could have been better. Performance was good from the dependable cast, with ajay devgn back in his elements and Amitabh giving a good performance in Anna Hazare type role. Rating 3.5/5

Bollywood Life: All in all, director Prakash Jha’s Satyagraha is a film made with a noble intention to create an impact, but the not-so-tight execution of a flat storyline with loopholes the size of lunar craters leaves you with the empty feeling you get after watching a strictly okay commercial entertainer! Rating 2.5/5

Mayanak Shekhar: Unable to find much meat in there either, we’re back to more public rallies and homilies and simplicities on bhookh, garibi and bhrashtachar as the film tries as hard to be entertaining as it does to sound intelligent, failing miserably at both. At some point, you hear yourself go, “Ab bas bahut ho gaya yar. Bandh karo bak bak.”  We get a lot of this on TV anyway, and at least we know what’s going on there. Rating 1/5

India Today: "Satygraha" conveys the uncontrollable anger and energy of a nation on the brink. For telling it like it is and for creating a compelling film out of the raw material of present-day corruption, the film deserves a standing ovation. Rating 4/5

Apun Ka Choice: Prakash Jha has got his finger on the pulse of the people, and convincingly portrays the angst of the common man in Satyagraha. But his noble intentions are done in by the abundant idealistic flourish he imbues the film with. Rating 3/5

Zee News: Jha’s ‘Satyagraha’ depicts how the road to freedom from the vile and corrupt government is long and not an easy one. But the audience already knows that. Unfortunately, the attempt to show this on screen is rather underwhelming. Perhaps, we can pin some hopes with the sequel that is if there is one in the pipeline. Rating 2/5

DNA India: Satyagraha is a bad script with good actors. The film could have been so much more had it taken the Madras Cafe route and made an honest, hard-hitting film. Watch it for Big B's performance. It would be a shame to miss that. Rating 2.5/5