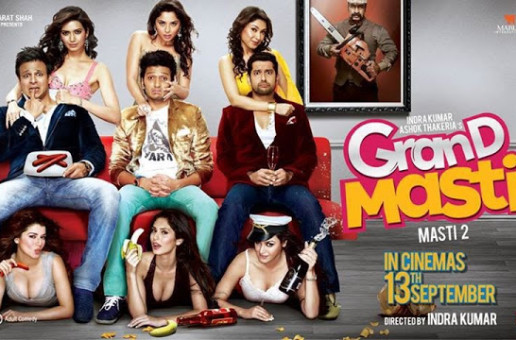 Bollywood Life: It seems Zaveri was too lazy this time to create a real plot, so GM is merely a series of bad and vulgar jokes that allows the writer to throw in as many puerile sexual innuendos as possible. It only consists of gags, spoofs and smut. Each line, each scene reiterates the fact that it is a sex comedy. In fact, it drills that into your brain so hard that by the end of it you want to grab something far stronger than an aspirin to dull the pain. We certainly do not recommend you see Grand Masti, since it’s an assault on the brain and the soul. But we know you’ll watch it anyway! Rating 0.5/5

Indicine: Grand Masti is loathsome to say the least. It is raunchy filmmaking at its worst with almost all of the jokes coming across as manufactured. It will be enjoyed by only a select few in the country. But the opening will be of grand proportions thanks to the pent up demand for a film of its genre. Rating 1/5

CNN IBN: Grand Masti', directed by Indra Kumar, is a smutty movie. And far from being embarrassed or apologetic about this, everyone involved wears it like a badge of honor.The sad truth is that 'Grand Masti' revels in making you cringe, not laugh. Adult humor tends to work best when some things are left to your imagination. But the makers of this film force-feed the audience images and dialogues and references so discomfiting, the only laughs you'll hear are nervous chuckles. I'm going with one-and-a-half out of five for 'Grand Masti'. It's vulgar, but too silly to qualify as an 'adult comedy'. Rating 1.5/5

Bollywood Hungama: A film like GRAND MASTI isn't plot-driven. Not at all. And don't even expect a story here. It's more about double entendres, [sexual] puns and gags and the writers go bananas to woo the spectator. There's nothing left for imagination here, nor does it hinge on puerile or kiddish jokes, since the characters indulge in some really naughty play of words. The humor, let me add, may sound provocative, disgusting and offensive, but come on, what are you expecting from a film like GRAND MASTI? On the whole, GRAND MASTI crosses all limits and boundaries vis-a-vis adult humor. This one's *strictly* for those who relish naughty jokes, outrageous lines and scandalous visuals. Rating 3.5/5

Hindustan Times: Every ten minutes or so, you hit a low point and think that this film can’t possibly sink any more but director Indra Kumar and co-writer Milap Milan Zaveri surprise you. They lower the bar yet again. This film, about three friends hoping to relive their wild days at a college reunion, is purposefully puerile, brain-dead and cheerfully offensive.The acting is abysmal. The humor is appalling and even the songs are pathetic. I can’t think of a single reason why you should see this film. I am going with half a star. Rating 0.5/5

Mumbai Mirror: Grand Masti is unabashedly gross, vulgar, crass, shameless and fearlessly adult. But for a moment one has to step back from the noise of dissent - from the guardians of Indian culture and their histrionic fatwas - and ask yourself one simple question: Who are we to choose for others? Bollywood's foray into the genre, I suspect, is here to stay. Be prepared for many more Grand Mastis, just remember the choice is yours. Rating 2/5

Times Of India: Grand Masti stakes its claim to being Bollywood's first adult comedy. And, just like the innumerable puerile potboilers that India's dream factory churns out with a warning that says — leave your brains behind, this one should have a disclaimer that reads, 'Leave your pretensions behind'. Once you do this, you can sit back and laugh aloud at the crass jokes this film throws up at regular intervals. Rating 3/5

Indian Express: No one expects films of this sort – boys and their toys – to be sophisticated or intelligent. By definition, they are meant to be crass and tasteless. But then filmmakers getting into this should go the whole hog, and give us what they promise: there was nothing adult in what I saw, only pubescent groping. In a slack tale, laden with stale lines, and a moral science lecture tagged on. Rating 0.5/5

Rediff: I do wish I had something, anything good to say about the film but I’m afraid there is nothing. There were parts that made me cringe so much that I couldn't bear to look at the screen.It is disturbing that a film of this nature should have a budget of a few crores, get such a wide release and receive so much publicity. I am going with zero out of five stars for Grand Masti because there is no way you can enjoy this movie and still claim you respect women. Rating 0/5

Mayank Shekhar: Ideally a film like this doesn’t merit a review. We knew the movie would be loaded with double meaning jokes. The issue is that a whole lot of the movie’s gags — if you can call them that – have, if at all, only one meaning. In which case, we’re not really watching a sex comedy now, are we. You don’t really get grossed out by it, which may have been the point. You just don’t laugh.At least half my row in the theatre had already left at the interval though. One is often advised to leave your brains behind for a film like this. It is the only way to ensure your IQ doesn’t drop to negative when you’re finally done with the movie. Rating: 1/5