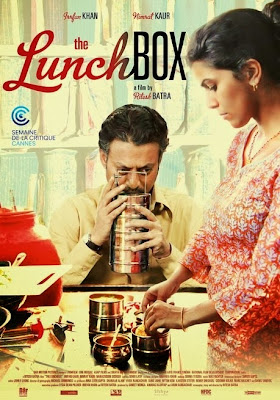 CNN IBN: I'm going with five out of five for 'The Lunchbox'. The greatest love stories are the ones that make you root for the protagonists to come together, despite their destinies. This film illustrates how love transforms the unlikeliest of people; it breaks down Saajan's walls and gives Ila the courage to fly. Treat yourself to 'The Lunchbox' - it'll leave you with a craving to seek your own little happiness. The best film I've seen in a long time. Rating 5/5

Bollywood Hungama: A well-told old-fashioned romance, THE LUNCHBOX gracefully unknots the trials, tribulations, fears and hopes of everyday people sans the glamour that the city of Mumbai has become synonymous with. On the whole, THE LUNCHBOX is a standout film, a sumptuous treat that's sure to be relished by connoisseurs of cinema. A film with a big heart, it makes you realize that you can unearth contentment and pleasure even if you board the wrong train. Easily one of the finest films to come out of India. Rating 4/5

Hindustan Times: The Lunchbox is my favorite love story of the year. It’s sweet, sad and deeply aching. Debutant director Ritesh Batra captures the fragility of life, the harrowing loneliness that a metropolis like Mumbai fosters, the hope of happiness that glimmers and enables us to go on. The Lunchbox is poignant and powerful. It will make you laugh and cry. And it will also make you hungry – I was dying to eat paneer kofta and bhindi when it finished. I’m going with four stars and absolutely insisting that you see it. Rating 4/5

Mumbai Mirror: Could a simple lunchbox and its contents change lives? One of the best films to come out of India in a long time, director Ritesh Batra answers the question in his little masterpiece, The Lunchbox. I watched The Lunchbox twice over a few months and can testify that it has a high repeat quotient, the final confirmation that was required for a perfect rating. There's buzz of an Oscar selection in the Best Foreign Language Film category. India will be hard-pressed to find a more deserving nominee. Rating 5/5

Times Of India: The Lunchbox has levels - it is the story of a man so lonely, he's forgotten what any companionship means. It is the story of a suburban housewife, deeply alone. It is the story of meeting via eating. It is a love-story - and a love-letter to Mumbai, to trains that go dhak-dhak, to dabbawalas and rain, to love and life, sugar and spice, the despair and hope that mark every heart.Its finesse qualifies this charmer as India's potential entry to the Oscars, The Lunchbox an unusual banquet, raising a bitter-sweet toast to life. Note: You may not like this movie if you don't like softly spiced whimsical tales - or food. Rating 4.5/5

Indian Express: If it hadn't been for the occasional flatness, and a couple of predictable notes, there would have been no flaws in this dabba. I also found Ila's mother's (Lillete Dubey) segment, included solely to underline another kind of vacantness, a little forced. But these are tiny niggles in this film that gets the rest of it so right. Batra's characters are a delight. They may be of Mumbai, infused with intense desi flavours, but can inhabit any part of the world. You want to take them home, sit them down at your table, and savour them, one mouthful at a time. Rating 3.5/5

Rediff: Batra, who has also written The Lunchbox, has allowed his smashing actors tremendous room to improvise, all the while himself sketching in nuanced details about the city, its food-ferriers, and the many disparities Mumbai is crammed with. It is a film of multiple pleasures -- small ones and overwhelming ones and exquisitely crafted ones -- layered one on top of the other, with something for everyone, and so, so much for the cinematic glutton. Like the dabbawalas he loves, this director delivers. Rating 5/5

NDTV: It is a unique piece of cinema crafted with great dexterity and attention to detail. A strikingly original, idiosyncratic and charming love story, The Lunchbox dismantles the established structures of the genre in ways that are at once startling and effective.It isn’t just the life of the male protagonist that it touches.Gorge into it and savour its lingering aftertaste. The Lunchbox holds riches that aren’t likely to be forgotten in a hurry. Rating 4/5

DNA: Indian cinema ought to be proud of moments like these. But beyond the adulation of the world press, the best thing about this bittersweet movie is its desi flavour that gives it a universal appeal. This one may not please those looking for a masala flick, but is more than your money's worth. But ensure that you eat well before you head for the movie, or else be prepared to deal with the hunger pangs everytime Irrfan opens The Lunchbox. Rating 4/5

KoiMoi: Watch or Not?: The Lunchbox within the first few minutes made its way into the cockles of my heart. Elegantly done, the film conjures a connoisseur variety of cinema where love and romance are stretched beyond the contours marked out by epic Bollywood romances. The love here has so much tenderness, eulogizes companionship of two very unlikely people who are drawn close over notes exchanged via a lunchbox, which almost builds up as a character in their story. Films like these are gratifyingly piquant and should definitely not be missed! Rating 4.5/5

India Today: The trailer might have you thinking it's a love story but it's much more than just that. In case you're looking for a paisa vasool family movie, this is not one to miss. It's almost as if the movie never ends. You walk out of the movie hall and the film continues with you. How it ends changes with your life experience. A highly recommended movie, that leaves you with a running film reel in your head, and a need to have have delicious food. Rating 5/5

Indicine: The Lunchbox is a stirring, intimate tribute to the city of Mumbai and its people. It shows nostalgia, forlorn emotions, and loneliness in its raw form and yet never fails to make the viewer smile. The culinary dishes conjured up on screen is sure to make the viewer hungry. Ritesh Batra has carved an intricate tale of companionship, quite ironically, by keeping it simple. Is The Lunchbox one of the best films of recent years? Yes. Should you go watch it? Don’t wait; just make a date with this Dabba. Rating 4.5/5