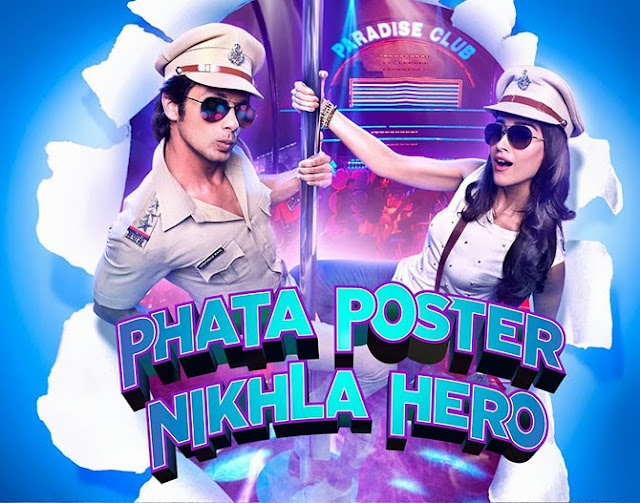 CNN IBN: If you're willing to set your expectations accordingly, there's some fun to be had in the low-IQ comedy, 'Phata Poster Nikhla Hero', particularly in the film's breezy first half.But writer-director Rajkumar Santoshi fails to stick with this cheerfully harebrained tone in the film's second half.I'm going with two out of five for 'Phata Poster Nikhla Hero'. It loses steam at the halfway mark when the laughs suddenly dry up. Rating 2/5

Bollywood Hungama: PHATA POSTER NIKHLA HERO brings back memories of old-fashioned comic entertainers. There's not much of a plot here, but you go with the flow without making much effort. You laugh, celebrate the silly gags and by the time the story reaches its conclusion, you realize that the film has won you over with its unfussy plot and basic characters, who don't have a serious bone in their body. On the whole, PHATA POSTER NIKHLA HERO is an entertainer all the way. If you relished AJAB PREM KI GHAZAB KAHANI from the team of Taurani and Santoshi, chances are you will also lap up this vibrant, kaleidoscopic, light-hearted entertainer. Rating 3.5/5

Hindustan Times: Like his earlier comedies, which include the cult classic Andaz Apna Apna, Santoshi aims to create a zany and wacky tone. In places, this film is inspired. But often, it’s just tired. But comedy like this needs to be relentlessly inventive and high-energy. He bungs in emotions that the film hasn’t earned. Post-interval, the vigor deflates considerably. But none of it can make up for the lack of laughs. Phata Poster Nikhla Hero is intermittently entertaining. If you are undemanding or a Shahid Kapoor fan, you might enjoy it. I’m going with two and a half stars. Rating 2.5/5

Mumbai Mirror: Phata Poster Nikhla Hero is a caper comedy that rides on pop culture and, in full awareness, cliches. Rajkumar Santoshi tries to put an original spin on the South-Indian film remake formula that Bollywood is besieged by. He attempts to mock it by getting rid of all "serious" elements and keeping it firmly in the comic zone. Unfortunately, it stops being funny after a while. Essentially a gimmicky two-star film that entertains in bits, a half star extra for Salman Khan's epic, self-deprecating cameo. Rating 2.5/5

Times Of India: The first half offers loads of cackles, chuckles, witticisms and spoofy scenes. Post-interval the comedy collapses for a bit with forced OTT drama, khaali-peeli action, and too many songs breaks, but makes a comeback with delightfully funny moments. This one's worth it for the 'howlarity' of it all. And Shahid in his element. Note: You may not like this film if you don't have a taste for silly humour & mindless gags! Rating 3.5/5

Rediff: PPNH tries too hard to impersonate both Andaz Apna Apna’s flaky sense of humour and Ajab Prem’s loony energy but cannot conceal its urge to include a dated brand of soppy sentiments. The upshot is a film with a multiple personality disorder.Occasionally, I half-smiled at the laboured silliness put forth by this clean but clichéd farce. Only the darn poster is, ultimately, too phata, purana for anything to come out of it except disillusionment. Rating 2/5

NDTV: Phata Poster Nikhla Hero is the kind of dim-witted comedy that might leave the hardiest of Bollywood junkies in tears. The agony of being subjected to this tattered bag of stale tricks can indeed be excruciating, when it is not outright numbing. Andaz Apna Apna is history. Phata Poster Nikhla Hero is not even Ajab Prem Ki Ghazab Kahani. Stay away from this film if you value your time and money. And if you still insist on giving it a shot, do remember that there is no refund on the ticket. That is what you will be asking for well before the joke winds up. Rating 1/5

Indian Express: And you hope that this spirit will colour the rest of the film, about a fellow who wants to be a film hero, and whose mother wants him to be a cop. Alas, that doesn't happen. On this one- liner of a plot, Rajkumar Santoshi has built a two-and-a-half hour film which is meant to make us laugh, but ends up making us groan instead. Rating 1.5/5

KoiMoi: Watch or Not?: Rajkumar Santoshi has stuffed his vast knowledge of commercial cinema well in Phata Poster Nikhla Hero. It is another formulaic film with a rather simple story at its core. If entertainment is all you expect from films, this one won’t hurt much in its first half. It has a hero who smashes, thrashes and makes you laugh all with equal ease! I won’t call it a must watch since the film becomes a drab post-interval with its dwindling laughter and story going haywire but nevertheless you can give this one a shot. It won’t be entirely regrettable! Rating 2.5/5

Dainik Bhaskar: Shahid Kapoor, he is trying hard enough to seem his whole career depends on this film. At the end of it, he even lists for the audience all the things he’s done in the movie: basically fought with the villain, danced with the item girl, romanced the heroine, done comedy, gone through emotional scenes, bashed up the goons, even saved the city... Truly, what else do you want? A headache pill will help. Rating 1.5/5

India Today: Santoshi as writer, director and the dialogue writer is in good form. He would have been terrific if could have captured your interest in the same way as he did in the first half of the film. Still, the film is worth more than a few laughs. More because of the way the director spoofs Bollywood's tried and tested conventions and the jokes he cracks at the expense of an industry he is only too familiar with. Rating 3/5

Indicine: PPNH, falters a bit post interval but the first half is thoroughly enjoyable and Shahid Kapoor is in superb form. He has clearly enjoyed playing Vishwas Rao and it shows. If you are in the mood for some clean wholesome entertainer this week, PPNH would not disappoint you much. It is pretty decent for a one time watch. Rating 3/5