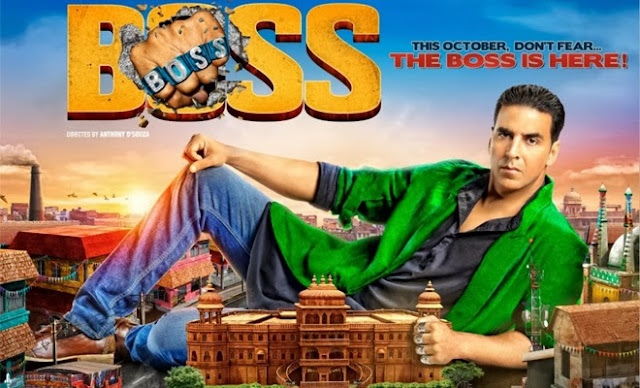 Suhas: In short, it’s Akshay Kumar’s show all the way & this is the first masala movie of 2013 that actually entertains. Give it a go! Its a must watch for Akshay Kumar Fans and a one time watch for others! That .5 extra stars is for only for Khiladi Kumar & his way of entertaining. Rating 3.5/5

CNN IBN: Unless you’re able to accept and move on from the fact that a majority of his movies are brainless, tasteless affairs, how do you survive a film like Boss while still trying to be fair to it?The problem here is that despite making those concessions – the movie requires that you apply neither common sense nor taste – Boss is still a pretty forgettable film. this remake of the Malayalam hit Pokkiri Raja is packed with lengthy flashbacks, cringe-inducing melodrama, and the kind of pedestrian dialogues that evoke memories of bad 80s potboilers. I’m going with one-and-a-half out of five. Neither original, nor entertaining, this Boss deserves to be fired! Rating 1.5/5

Bollywood Hungama: BOSS is a clear departure from previous Akshay starrers , yet it has everything that spectators look for in masala fares in fact, BOSS is a fast-moving roller-coaster ride that gives you no time to think.  It offers entertainment by the bucketful and celebrates the formula with panache. On the whole, BOSS is a full-on masala entertainer that's very clear of its intent. It is designed to magnetize lovers of desi commercial cinema and woo the BO. If you savor and relish old-school masaledaar entertainers, BOSS is sure to win you over. Watch this one -- it's a paisa vasool entertainer! Rating 4/5

ETC Bollywood: Boss is an action-packed film with a good dose of family drama hinging on father-son relationship. The screenplay has interesting twists and turns which keep the audience interest alive. No doubt, there are dull moments in the screenplay but the dullness doesn’t last for too long.On the whole, Boss is an entertainer all the way. It will keep all those associated with it smiling. Business in single-screen cinemas and ‘B’ and ‘C’ class centres will particularly be very good. Rating 3/5

Times Of India: A remake of 2010 Malayalam film, Pokkiri Raja, Boss is a formulaic action comedy. There are truckloads of stunts throughout and whatever falls in between constitutes the plot so don't expect logic. It seems the action was probably chalked out before and the 70's-like melodramatic story was inserted later as filler, which explains why most characters end up being silent spectators, once Akshay makes an entry. Rating 3/5

Indian Express: Within a few minutes of the opening, I knew this is one of those flicks you can watch with your ears. Dhadaak, khachhaak, crrruunch, thapppadd, dhachhaak. And krrrrich, bhadaang, dhadaam. For all intents and purposes, this could be called Rowdy 2, because Akshay does exactly what he does in that earlier film, but with different co-stars, and a plot that is totally subservient to labelling him Boss every two minutes. Rating 1.5/5

Rediff: Given the low benchmark of this genre, it’s akin to praise when I say Boss is neither as absurd as Rowdy Rathore nor as ghastly as Policegiri. When its intended attempts to tickle fail, Boss delivers a masterstroke in Mithun Chakraborty’s hammy performance, letting his big Gollum’s eyes and Raakhee-inspired sentimentality -- Aur woh aayega -- to do the trick. It’s a moment of genuine mirth in a sham that’s all title no thunder. Rating 2/5

Indicine: Boss turns out to be an unexpectedly enjoyable fare with a rather potent mix of comedy, drama, action and romance. Akshay Kumar’s star power and charisma powers Boss from an ordinary fate to an above average outcome. If you are in the mood for some harmless fun this festive season and if you don’t like to nitpick when it comes to movies, give Boss a chance. Rating 3/5

NDTV: Unfortunately, for all the pain that he inflicts on himself and the audience, this boss is never quite right. Boss is an action flick in which both logic and good taste go for a toss from the moment it kicks off.The humour is cringingly coarse, the stunts are completely over the top and the emotions never ring true.Boss is epic all right – an epic mess. Boss, needless to say, is Akshay Kumar’s film all the way and there are several moments in it when he comes across as perfectly cut out for such antics. Rating 2/5

DNA: Boss is unpretentious in its effort to draw you in with humor, action and some trade mark filmy drama. But it stands out in its treatment in comparison with the crowd of wannabe pleasers seeking to use the same formula.A complete paisa vasool experience at the movies, Boss is an overdue treat for Akshay Kumar fans who have been waiting for him to return to his forte. A true mainstream entertainer in every sense, this Boss does pack a solid punch! Rating 3.5/5

India Today: The posters and the promos of the film make it clear that Boss is a masala film. And going by the recent trend, for masala films, all that's needed is a "filmi" hero, cars flying around and some "nach gaana". Who cares about the plot and the product?At around 2 hours and 25 minutes, Boss is way too long. There are very few scenes that are actually funny in this supposed entertainer. Akshay's favourite line is "Boss is always right". I would disagree! Rating 1.5/5

Bollywood Life: All in all, Boss is a cliched action comedy that entertains in parts as Akshay Kumar tries to steer through the muddle with his star skill! Rating 2/5

Zee News: Director Anthony D`Souza who failed so miserably in "Blue", here rises out of the deep to deliver a full-blast rabble-rouser. Every moment in "Boss" is a celebration of cinematic conventions derived from decades of Bollywood entertainment. This is a fast-paced, zany, full-on masala fare. There is a tempting swagger to Akshay`s performance matched by the narration`s tidal tempo. Irresistible energy and endearing gusto underline the show`s voracious appetite for a comic kill. Ekdum fit hai, Boss! Rating 4/5

KoiMoi: Boss is an exceedingly noisy film and yet is tremendous fun in parts. Vividly conventional, Anthony D’Souza’s Boss fits in the unoriginal moulds of Bollywood’s recent recipes of masala flicks. However, the overused plot still manages to solidify simply because of Akshay Kumar’s panache that makes the film’s pulverizing action so delectable. There’s no reason why you should miss savoring this tremendously winsome film whose beating to the pulp action will have you from the word go! Rating 2.5/5