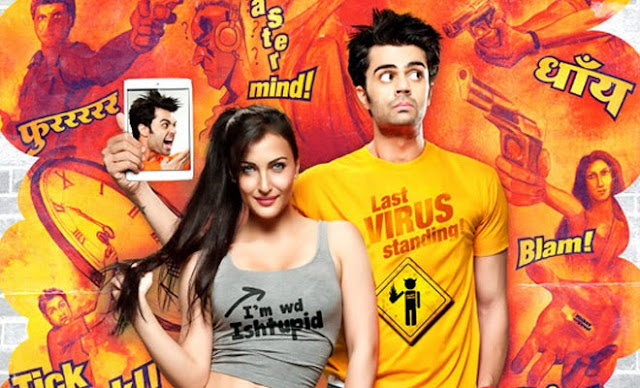 CNN IBN: I wouldn’t be surprised if Mickey Virus was greenlit only because some smart-alec marketing wiz pitched it as the next Vicky Donor. Problem is, this film is never more than just a good pitch. A concept in search of a plot. Mickey Virus isn’t unwatchable, but at 2 hours and 15 minutes, it certainly overstays its welcome, offering little by way of laughs or thrills. I’m going with two out of five. Walking out of the cinema, you’ve forgotten it already. Rating 2/5

Bollywood Hungama: While much of the first half of MICKEY VIRUS is committed to Mickey, his friends and the romantic liaison with Kamayani [Elli Avram], the story gathers momentum towards the post-interval portions. Saurabh sets aside the best for the second hour as MICKEY VIRUS gathers pace and alters tracks [it gets into the thriller mode], with several unanticipated twists thrown in the sequence of events. The murder, the ambiguity behind the murder, the cat and mouse game… Saurabh ensures there's no dreary or yawn-inducing moment now. The build up to the culmination is nerve-racking, with the identity of the actual perpetrators catching you completely unaware.On the whole, MICKEY VIRUS is a well-made, engrossing thriller that should be liked by the youngsters. Rating 3/5

Bollywood Life: Manish Paul manages to stand tall even in his first film. He’s a natural on camera and nowhere does the anchor overshadow the actor. Manish makes you believe that he is Mickey Arora – an aloof guy who is quite capable of hiding a trick or two up his T-shirt sleeve. If his spontaneous hosting is impressive on the small screen, the actor’s spontaneity on the silver screen cannot be missed. Elli Avram’s debut on 70mm is glamorous, she’s far better than Nargis Fakhri in Rockstar or even Katrina Kaif in her first few films. Elli emotes and looks sexy enough for us to gauge her acting prowess. Rating 4/5

Hindustan Times: Somewhere buried deep inside Mickey Virus is an entertaining story about a lazy, computer hacker in Delhi who is enlisted by the cops to crack a complex multiple murder case. But Mickey discovers that all is not what it seems and finds himself embroiled in robbery and murder. The trouble is that writer-director Saurabh Varma makes this story so unnecessarily convoluted and long that by the time we have the great climactic reveal of who did what, we don’t really care. Rating 2/5

Times Of India: This one isn't so deadly that we can't decode, or so simple that we just download and ESC (read: escape). So, risk it and hit ENTER! Varma allows his characters to flourish in wit and humour. The plot is intelligent; there are laughs (sample: a tee printed - 'Jab Tak Hai Trojan'), some suspense and surprises too. Though direction is not error-free, it could've been more innovative and he often tips the balance between comedy and thriller. This virus won't crash your system. Watch it! Rating 3/5

NDTV: But this film, like the hacker-hero, is a bit like a Viru Sehwag innings. When it is good, it is rousingly good. When it falls short, it is exasperating. The screenplay isn't as smart as it pretends to be. It is neither all that funny nor particularly thrilling. Mickey Virus has two distinct halves - the first is devoted to loads of youthful drollery as two policemen strive to get the computer whizkid on their side; the second takes on the form of a deadly whodunit in which several lives are lost.Mickey Virus is a passable film. Rating 2.5/5

Rediff: Mickey Virus is based on an interesting idea, the plot is good and the film is relevant at a time when cyber crime is increasing. However, with weak direction, even the best of stories cannot be told well. This 130-minute venture takes too long to set the tone of things and could definitely use a shorter, tighter script. Mickey Virus is two films divided by an interval. The first half is a marathon of the now (thankfully) defunct TV show Dil Mil Gaye and the second is a suave, well-scripted suspense. If you have time to spare and the strength to tolerate the first half of the film, book your tickets now. Rating 2/5

Indian Express: Mickey Virus' teams a debutant director and a first time lead actor, and a fine supporting cast, and comes up with a film that holds attention for some time, before it gets stretched into a too-long second act. What I liked about this bunch is that they are not trying too hard, and except for a couple of exaggerations, seem just right for their milieu. It's all fun up to a point, and despite a couple of amateurish edges, the director shows potential. So does Paul. Rating 2.5/5

India Today: The comic-thriller is fast paced, constantly taking you from one unexpected situation to another. The dialogue is witty, full of repartees and with many smart one-liners that most characters, even the supporting ones get to mouth and display their comic mettle. When the film slips into thriller territory it does remarkably, keeping the dramatic tension intact, gradually building up the tempo to a lively, entertaining climax. To its credit the film's humour is quirky but not once below the belt. Mickey Virus is not a bug you would want to get rid off easily. Go get infected! Rating 3/5

Koi Moi: Saurabh Varma’s Mickey Virus is indeed a wickedly thought film but it adopts an overtly contrived and complicated plot to build a story that is predictably simplistic. The screenplay is stuffed up with unnecessary elements, mostly songs, that makes the film’s first half feel like an absolute drag. However the concept saves it from being an absolute nonsense though it might ring incomprehensible in parts. Manish Paul’s otherwise cute buffoonery isn’t enough to drag you to the cinema halls but given good films are in short supply these days, this might be the best way to relish your popcorn. Rating 2.5/5

Zee News: Quirky, colourful, agile and hectic, ‘Mickey Virus’ is a `virtually` interesting way for Manish and his director to start their respective careers. This is an oddball of a movie that tries to make sense of the senseless whirligig of urban internet-driven lifestyles. Rating 3.5/5

One India: Mickey Virus manages a perfect balance of wit, homour and thrill. This one is effortlessly entertaining and a treat to all the young internet keedas of today's world. Rating 3/5