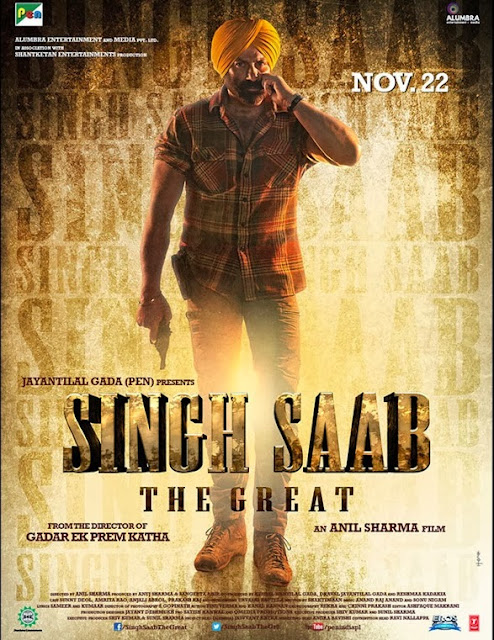 Expectations: Anil Sharma and Sunny Deol joined hands in 2001 and we witnessed an All Time Blockbuster, Gadar - Ek Prem Katha and music of the film was also blockbuster. Now, they are back!! But Uttam Singh was the music director of Gadar and this time, talented Sonu Nigam composing title track and the rest of album is done by Anand Raj Anand. A perfect choice for this kind of film? Yes. Let’s check whether songs also sound great.

1- Singh Saab The Great - (Sonu Nigam & Teesha Nigam): A soothing Dhol-experience. Amazing composing, not completely Punjabi but have Punjabi touch and it makes the title track a great experience to listen. Sonu Nigam sang the song superbly, He forgets who he is and produce a "Sonu Nigam" who is Punjabi. Teesha is also really good. Excellent work by Sonu Nigam. Though song is kinda lengthy. Rating 4.5/5

2- Daaru Band Kal Se - (Sonu Nigam): A different and interesting track by Anand Raj Anand. Nagada, Dhol etc are being played but are not dominant like other Anand Raj Anand tracks in past. Sonu Nigam is again simply awesome. Rating 3.5/5

3- Palang Todh - (Sunidhi Chauhan & Anand Raj Anand): An item song sung by Sunidhi Chauhan, could it be better than this? It's much better than many item songs like Pinky, Bubly Badmaash etc, though not a very impressive track. Composition is simple. The hook line sounds like a folk song. Rating 2.5/5

5- Daru Bandh Kal Se (Remix) - (Sonu Nigam): We are not really fans of remixes, but we can say that this will satisfy you if you usually like the remix songs. Personally we think, the original is still better. Rating 2.75/5

6- Heer - (Sonu Nigam): It's not a proper song. It's traditional singing of "Punjabi Heer" (If you are Punjabi, you know how people in Punjab used to sing "Heer Waris Shah") with traditional composition with some support of instruments in background but only Sonu Nigam's vocals are instruments, rhythm and arrangements here. Exceptionally well sung by Sonu Nigam. Rating 4/5

NOTE: Nice comeback by Anand Raj Anand and very good attempt by Sonu Nigam. Not a single song of the album is diappointing, but none of them are the type of songs we want to listen again and again. The songs are kinda situational and suit with the theme of movie.