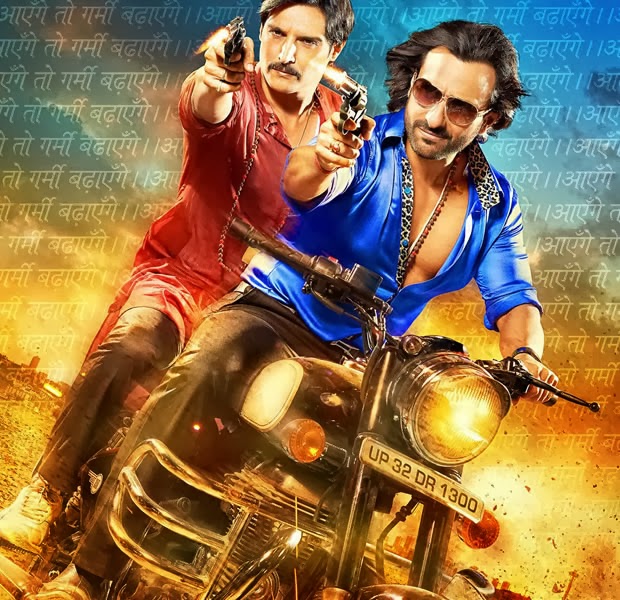 Up until the halfway mark, Bullett Raja is rollicking entertainment. Our gangster protagonists kill, maim, kidnap, and intimidate their rivals, all the while bickering and joking, in Dhulia's direct nod to Butch Cassidy and the Sundance Kid. Sadly the film's screenplay comes undone post intermission, its second half disintegrating into a bloody revenge saga. I'm going with two-and-a-half out of five for Tigmanshu Dhulia's Bullett Raja. With a tighter script and an uncompromising vision, he might've knocked this one right out of the park. At the moment though, it's an easy but forgettable watch. Rating 2.5/5


BULLETT RAJA is no exception. It's raw, unrefined and harsh, much like Tigmanshu's earlier endeavors.  Notwithstanding the oft-repeated premise, the screenplay has ample twists and turns and leaves you wondering, what's gonna happen next? The icing on the cake is the twist towards the penultimate moments. On the whole, BULLETT RAJA is Tigmanshu Dhulia's most 'commercial', mass appealing film thus far.  Enjoyable, engaging and extremely distinctive, BULLETT RAJA is not to be missed! Rating 4/5


Bullett Raja could have been so much more. Owing to the name of the director attached with the film, it wouldn’t have been unfair on our part to have expected it to deliver all guns (and bullets of course) blazing. But Alas! Bullett Raja ends up as just another logicless action masala film with a hero who is looking to ape Chulbul Pandey. If you have a lot of free time in your hands, and lot of hair in your head to pluck out, please go watch Bullett Raja. Rating 2/5


Bullett Raja is essentially a crackling character in search of a story. Tigmanshu who also co-wrote the story, gives Saif a full-bodied character to inhabit but he fails to provide the character a compelling story to work with. Bullett Raja is a standard issue revenge story with the usual array of corrupt ministers, cops, criminals and their machinations as elections loom large. Which is a shame because these UP cowboys could have been fun. I’m going with two and a half stars. Rating 2.5/5


When the girl enters that Bullett Raja unravels entirely and the flow is wrecked. One inexplicable, unnecessary, and unevenly paced sequence after the other, the film changes track and enters the realm of the Dabangg clones. Even though the screenplay is relatively unbent by Dhulia's standards, it still rises above the rest in the genre he's wrestling in. Here's hoping Tigmanshu Dhulia ditches this spurious chase and returns to form with his brand of movies - forged from truth and insight; straight from the heart - that we've come to love. Rating 2.5/5


Possibly the best role Saif has played ever after Langda Tyagi in Vishal Bhardwaj’s Omkara. Saif’s Raja Mishra aka Bullett Raja is rooted and raw. At 2 hours and 20 minutes Tigmanshu Dhulia’s Bullett Raja succeeds at hitting the bull’s eye with a with, quirky and engaging shot of entertainment. Go, pull the trigger this weekend! Rating 3.5/5


Bullett Raja (BR) is zany and funny, an Uttar Pradesh take on Sholay's Jai and Veeru.BR scores with its tight performances, Saif terrific with his clenched-jaw comedy, Shergill intense and growlingly funny, Jamwal's flying kicks and wavy hair making the landscape even hotter. Still, BR is a racy ride, cynical, yet sweet, dark, yet bright. Go watch - you'll enjoy those bangs in the dark. Note: You may not like this film if you avoid violent political tales. Rating 3.5/5


Bullett Raja is rife with predictable scenes, bad editing and a lack of control over the script, which spirals into an unending loop of absurdity. The pseudo-patriotism blends into personal enmity with the corrupt without much warning, leaving the viewers confused. While no two people can like the same kind of films or even agree on the definition of a good film, it is difficult to judge if even hardcore Saif Ali Khan fans should go for this one. Rating 0.5/5


Guns, girls, grime and glory come together in a layered tale of corruption, politics and kinetic camaraderie. The songs brakes the pace. But then you really can't have a formula film without the song breaks. It takes a politically savvy storyteller of Dhulia's skills to convert the lowest ebb of our politics into an occasion of high drama. Rating 4/5


Bullett Raja, from the core, is like a typical masala revenge drama – the difference is the Dhulia touch to it. Live locations, raw action and interesting characterizations make it stand apart. There’s nothing we haven’t seen before. Bullett Raja would’ve been a great example of a fine mix between real and mainstream but it falls too short of that. Watch it if you’re a fan of some edgy dialogues. As for the rest of it, you’ll want to rain bullets on this Raja. Rating 3/5


Bullett Raja', the extra 't' for emphasis, is a potboiler with little pretensions to realism but much too close a connection with Dhulia to entirely jettison it too. This is not Dhulia trying to make commercial cinema "aesthically better", as he has been emphasising. This is the celebrated director and now a fancied actor completely surrendering himself to it. Rating 2/5


Bullet Raja attempts to reach out to large numbers just like the above mentioned 100-crore earners. Yet, in its quest to grab more eyeballs director Tigmanshu Dhulia's film does not sacrifice a certain essence that you have come to associate with his recent films .The result is a des-chic, guns and gore affair, set against the backdrop of conniving UP politics and mafia.Bullet Raja's slogan claims "aayenge toh garmi badyaenge." To the film's credit it delivers what it promises. Rating 3.5/5


It wouldn’t be a terrible thing if you miss Bullett Raja. To begin with, it was a pointless film that destroyed its gutsy premise to tatters. Attempting to strike a balance between over-the-top and ridiculous, this one is hands down Dhulia’s most immature attempt at filmmaking. From the man who made Paan Sigh Tomar filled with deft touches, Bullett Raja is a grotesque misfire. Rating 2/5


It felt like Tigmanshu was making two films. One one hand, he was broadly commenting on the criminal-political nexus in UP. So we see criminals enjoying VIP treatment in jail and even running the show, both on the mafia and the political level from jail. We see politicians openly growing opium in their fields. Tigmanshu shouldn’t try to copy Prabhudeva but make straight-from-the-heart films that he’s famous for. We missed the comic punches and the black humour of his earlier efforts. He doesn’t deserve this and neither do we. Rating 3/5