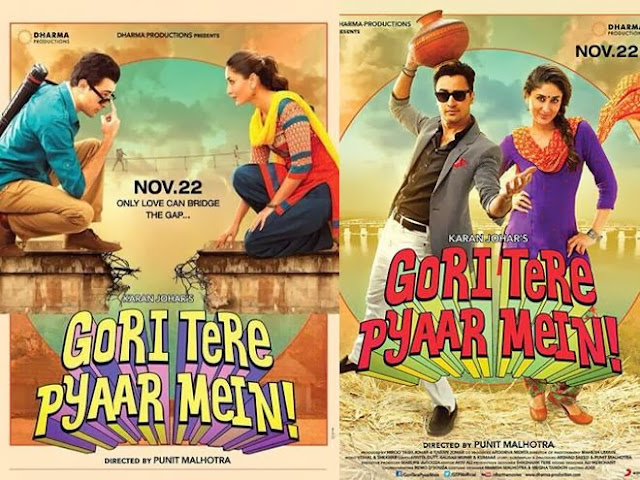 CNN IBN: Men are from Mars and women are from Venus, but the characters in director Punit Malhotra's Gori Tere Pyaar Mein are so flat-out uninteresting, you have to wonder if they're from another galaxy altogether. We'd have cared more about this mismatched couple had the makers invested in a sharper script. I am going with a generous two out of five for Gori Tere Pyaar Mein. It's as enjoyable as drinking a cup of tea that's been left out in the cold. Rating 2/5

Bollywood Hungama: The first hour of GORI TERE PYAAR MEIN! may give an impression that Punit Malhotra is back on familiar grounds urban setting, wittiness and styling.  Punit does an about-turn in the second half. The writing has its highs and lows in this hour; it's absorbing at times, but not making much of an impact intermittently. However, there's no denying that the noteworthy moments outweigh the blemishes. You exit the auditorium with a feel-good sentiment and a smile on your face. On the whole, GORI TERE PYAAR MEIN! is a charming and refreshing coming of age film plus rom-com rolled into those 2.25 hours. The film maintains the right balance between amusement, hilarity and engaging moments. Recommended! Rating 3.5/5

Indicine: Imran was criticised for his weak performance in ‘Once Upon a Time in Mumbai Dobara’, however the actor impresses big time as Sriram. He keeps it simple, knows his limitations and delivers what could well be his most spontaneous performance. Kareena Kapoor Khan adds life to Dia. Like always, she looks stunning! To sum things up, Gori Tere Pyaar Mein is a film that can be watched and enjoyed with family or friends. If you like a feel good love story, like most of us do, go give it a try! Rating 3.5/5

Hindustan Times: Gori Tere Pyaar Mein! is fun as long as it sticks to the formula. But in the second half, director Punit Malhotra, misguidedly moves into Ashutosh Gowarikar mode. Meanwhile the narrative becomes both melodramatic and even more synthetic as Punit tries to inject emotions and a sense of nobility that hasn’t been earned. The best thing about Gori Tere Pyaar Mein! is Imran who maintains an easy charm, even when he’s adjusting to gobar and garibi. I’m going with two and a half stars. Rating 2.5/5

Times Of India: Punit's 'GTPM', is a sweet, breezy romcom with likeable characters presented in glossy, lavish, true Karan Johar (producer) style. In the second half, the 'the bridge over troubled waters' project is a bit stretched, and you wish the gaonwallahs would leave the pair to romance instead. Music (Vishal-Shekhar) is peppy and pleasing.This isn't the most rousing romance (second-half lacks 'rom'), but has its feel-good moments. Chew it up with some 'Chingam' and a cute date. Rating 3.5/5

Indian Express: Punit Malhotra did alright with his easygoing, easily forgotten 'I Hate Luv Storys'. Imran is quite the same here, not holding anything sacred or dear in that very with-it cool way and then letting loose on what he really thinks about fellow rich kids like him but with bleeding hearts. However Malhotra aims to be different without a difference here and his core audience suitably placated, he rambles onto that village and its – you guessed it – very 'Lagaan' ending. Bleeding hearts can be messy, especially when all you have been aiming for so far are handkerchiefs to dab some eyes. Rating 0.5/5

Rediff: Gori Tere Pyaar Mein is essentially two different films separated by an intermission, with a few, weak common threads between the two. Gori Tere Pyaar Mein’s saving grace is that it is a love story and the second half will manage to melt your heart, if only slightly. It’s the classic opposites attract story and hey, if you’re into that kind of thing, this might be your kind of film. Rating 2.5/5

ZEE News: Generally speaking, ‘Gori Tere Pyaar Mein’ is a clean, light hearted and fun film but don’t go to watch it keeping your expectations too high. If you are sucker for Rom-Coms, especially the Karan Johar kinds, and if you have not watched a film in a long while, then chances are you might enjoy it. Rating 3/5

India Today: All in all, the story is weak. Direction is poor too. Had Puneet stuck to a different kind of film perhaps, one that catered more to generation Z's rich tastes, then that film would've definitely fared better. Vishal-Shekhar have composed the music in the film, and when heard otherwise, the songs seem nice. Watch the movie if you have to, if you like to watch big stars on the big screen. For the rest, skipping this movie would be a wise decision. Rating 1.5/5

Koi Moi: It comes as a pleasant surprise when director Punit Malhotra has upped his standard by delivering a cutesy and enjoyable romantic comedy. Aided with the wicked chemistry of Imran Khan and Kareena Kapoor Khan, Gori Tere Pyaar Mein! conjures up a charmingly enviable romantic comedy which is delightful and breezy without an ounce of melodrama. The subtle cool candour isn’t novel but this run-in-the-mill story is exceptionally endearing. Rating 3/5