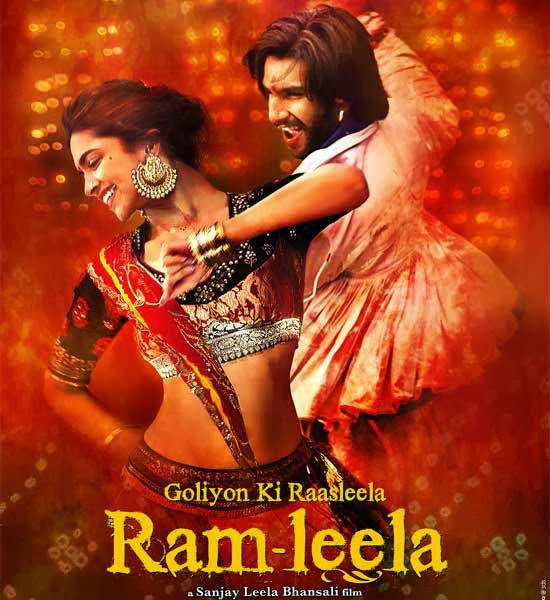 Bollywood Hungama: RAM-LEELA not only has a spellbinding effect, but it ships you to an unfamiliar world absolutely. You may have an inkling of the plot, but you definitely don't know how SLB will give an altogether innovative twirl to the premise. On the whole, GOLIYON KI RAASLEELA RAM-LEELA ought to be watched for multiple reasons: the electrifying chemistry between its lead actors, the strong dramatic content, the scintillating musical score, the violent streak in the narrative and of course, Sanjay Leela Bhansali's execution of the material. This is Sanjay Leela Bhansali's most accomplished work to date. It's a work of outstanding artistry. No two opinions about it. A masterpiece by the master craftsman Sanjay Leela Bhansali! Rating 4.5/5

Times Of India: Quite unabashedly, the filmmaker uses his lead pair's real and reel chemistry, fuses it with sexual tension and makes it compelling for you to partake in their love-hate relationship. For the most part, Ram-Leela, SLB's most commercial work till date, has nice doses of raunch and ras (juice). Deepika is breathtaking and in top form. Ranveer displays his six packs and histrionics with fair ease. This could be the start of his journey into superstardom. You have to also applaud Richa Chadda and Supriya Pathak Kapur for being the talent they are. Rating 5/5

CNN IBN: Sanjay Leela Bhansali turns Ram Leela into such a passionate celebration of love, you can't help be seduced by it. In the end it is Bhansali - credited for screenplay, editing, music, and direction - who leaves his stamp all over the film. He brings great style and aesthetic to an unapologetically commercial film, which I'm happy to say is far more engaging than the lazy blockbusters we've seen lately. I'm going with three-and-a-half out of five for Ram Leela. It's great fun - not the word you'd normally associate with a Sanjay Leela Bhansali film. Rating 3.5/5

Hindustan Times: Ram-leela is Shakespeare on steroids and for the first half, it works wonderfully. But the narrative starts to wobble just before interval and post mid-point derails completely. The plot becomes more and more clumsy and the joy we have in these characters is snuffed out by violence and ugliness. In her last few films, Deepika has stolen the show from her heroes but this one belongs to Ranveer. Still Deepika and Ranveer make Goliyon Ki Raasleela Ram-leela worth watching. I’m going with three stars. One is for the two of them. Rating 3/5

NDTV: It is a bit of a miracle that the film doesn’t actually implode and disintegrate in a giant blaze like some explosives-laden Ravana effigy on a festive night. If you are drawn by the raw magnificence of the setting and the inevitable excitement of the occasion – after all an SLB offering cannot but be an event film – here’s sound advice: your travel agent could do a better job of getting you to Kutch. Goliyon ki Raasleela Ram-Leela is all body and no soul. Rating 2/5

Rediff: Goliyon Ki Rasleela Ram-Leela -- an acronym of which unfailingly reminds me of Greater Kailash Residential associations -- is a monstrously excessive film with a riot of colours, a girl who looks very pretty indeed and a daft hero, but despite that being the warning on the tin whenever you attempt (foolhardily) to buy into a Bhansali product, this can’t be what you bargained for. GKRR is an overplotted, bloody mess. Rating 1/5

Indicine: Ram Leela is back to form stuff from the showman of the post-Subhas Ghai era. He knocks it out of the park with his Gujarati Romeo Juliet adaptation. Ram Leela is entertaining all the way through and never forgets what it is meant to be – a highly tense, dramatic romance! It is a must watch for lovers of epic romances. Rating 4/5

DNA: It is a lovely mixture of the familiar and the fresh. It is impossible to watch this film impassively. There are enough magical scenes, to make you feel you have to watch it a second time to soak it all in. This is a movie about love and hate and there are parts that you will love and portions you might hate but you cannot remain dispassionate and that would be this director's best compliment.This is a film by a true romantic, who is brimming with crazy passion. If you share that with him, watch it. Rating 3.5/5

Indian Express: 'Ram-Leela' creates a couple that ignites the screen, and most of the time when these two are on screen, you keep watching. It's when the guns come on, and the gun-masters start roaring and shouting, that the love-story drowns, and everything gets both too noisy and too choreographed. I enjoyed the lovers, and their ram-leela: if only the film had been more ras, not goli-leela, more roses than guns. Rating 2.5/5

India Today: Goliyon Ki Rasleela Ram Leela has each and everything that you expect in a Sanjay Bhansali film. Picture perfect frames, huge colourful sets, beautiful heavy costumes, emotions, poetic lines and melodrama. It's a spectacular show!The film has a lot of moments that stay with you, Ram and Leela's passionate attraction that draws them to each other is very well done and that's what makes the kissing scenes just a part of the big picture.It's well hyped and still surpasses all expectations. For me Goliyon Ki Rasleela Ram Leela is a masterpiece! Rating 4.5/5

Bollywood Life: Goliyan Ki Rasleela Ram-Leela is surely worth watching. Besides Ranveer and Deepika’s performances, Bhansali’s music is captivating. While the story of the film is not extraordinary, Bhansali’s brilliant execution is what makes it special. Priyanka Chopra’s item number is nothing less than exotic – it’s like icing on the cake! Watch this one for stellar performances, great music and because it has been shot beautifully. PS: Don’t expect too much and you’ll be satisfied after watching the film. Rating 3/5

Koi Moi: Ramleela is one of India’s most novel take of Shakespeare’s Romeo and Juliet. There is an alluring magic in the film that will enchant you. The primary reason why you shouldn’t miss this one is because of Ranveer and Deepika’s wonderful and visceral chemistry. It is quite a daunting affair to encapsulate the nuances of love’s wilderness and Ramleela epitomizes the menacing feral love between its lead characters with poise and ease. Rating 3.5/5