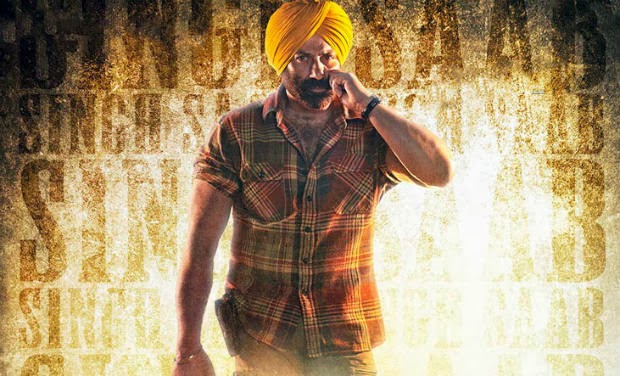 Bollywood Hungama: SINGH SAAB THE GREAT too maintains an iron grip on emotions and sentiments. Like GADAR, the emotional chord is between the couple  and also between the brother-sister  this time. But what weighs the film down is the conflict with the antagonist. It's predictable and one feels that the issue of an honest citizen waging a war against the corrupt has been done to death. On the whole, SINGH SAAB THE GREAT is atypical Sunny Deol film that a section of the audience still enjoys. The clapworthy dialogue, the raw appeal, the undercurrent of emotions and of course, the dhaai kilo ka haath should appeal to those who relish desi fares, especially the single screen audience. Rating 3.5/5

Hindustan Times: Early in Singh Saab The Great, a character asks: Kaun se zamane mein jee rahein hai aap? Exactly the question on my mind as I watched this film. Because director Anil Sharma and Sunny Deol still seem to be stuck in the 1980s. Singh Saab The Great is a singularly soul-sucking experience. It doesn’t even work as unintentional comedy. I’m going with one star. Rating 1/5

Indicine: Overall, Singh Saab The Great, largely delivers on the promises of a good action filled drama. It is loaded with emotions, action (even though not quite as much), and even a bit of romance and social service. If you are on a lookout for a light weight film which doesn’t weigh heavily on your brains then give it a watch. Rating 3/5

Times Of India: Anil Sharma's Singh Saab the Great has its heart in the correct place. Sunny Deol's earnestness shines, throughout the duration of this melodrama. But these guys have to choose better plots to make a point. We've seen a honest collector single-handedly trying to tackle corruption a zillion times. ultimately the film is just reduced to a trite, over-the-top Bollywood hit-and-holler affair. And the treatment; ouch, it hurts more than the hero's blows. Then fists of fury fly; a crass item song is sung, a sting operation is conducted and good triumphs over evil. Rating 3/5

Bollywood Life: Singh Saab The Great is a typical Sunny Deol film and if you are a fan of the actor, you wouldn’t mind watching it. If you want to watch a film with your family that isn’t a remake, is full of action and has plenty of drama, this one is perfect. PS: It was nice to see so many old people in the theatre. A rare sight these days, considering the kinds of films that are being made, hai na? Rating 3/5

DNA: It’s all about Sunny and his dhai kilo ka haath in this two and half hour display of brawn over brain. Dialogues are written keeping in mind the single screen audience with Deol screaming his lungs out for most of the part. Second half and the climax could needed to be tighter, especially when there is no unpredictability in the outcome. Strictly for Sunny Deol fans, Singh Saab tries to recreate the glory days of this actor-director duo but doesn't succeed beyond a point. Rating 2/5

Zee News: In Singh Saab The Great, Sunny delivers a wallop. Looking every inch the Sardar in-charge, he furnishes the film with a flair that is quite engaging. While the plot tends to sag under the weight of italicized cliches, the twists and turns are negotiated by the technicians with ample aplomb. There is a virility and fluency to the storytelling. Singh Saab The Great is a homage to the cinema of the 1980s when Sunny was the daredevil determined to bring on a social reform. Somewhere, that hero lost his way. It's good to have him back. Rating 3.5/5

Koi Moi: Singh Saab The Great is perhaps one of recent times’ most novel masala films. Despite a multitude of grave hitches, the film is surprisingly original and intense. Being fed on a host of extremely trashy and mediocre masala films which have become Bollywood’s staple these days, Anil Sharma gives us a welcome change. Sunny Deol and Prakash Raj make the film worth a watch for their earnestness and ardour at portraying their respective roles. I won’t call this fantastic or thrilling but for its sheer unconventionality, the film had me impressed. Rating 3/5