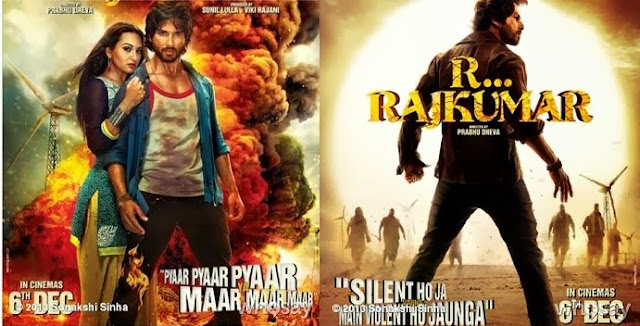 Exceptions are always high when Pritam is the composer of an album. And he is composing first time ever for a Parbhu Deva film.

1- Gandi Baat - (Mika Singh & Kalpana Patowary): Amazing rhythm. Awesome energetic track (and already a chartbuster). It has some similarties with recent Shahid-Pritam hit "Dhating Naach" from Phata Poster Nikhla Hero but this one is much better. Both singers have done a really good job. Very enjoyable track. Rating 4.5/5

2- Saree Ke Fall Sa - (Nakash Aziz & Antara Mitra): This track has a Govinda-touch and if you have been a fan of Govinda-songs, you are going to love it. Pritam has given this a Pritam-ish touch also which works big time. Nakash sounds really good and both singers have done justice to the track. Rating 3.5/5

3- Mat Maari - (Kunal Ganjawala & Sunidhi Chauhan): The track starts with some dialogubaazi by Sunidhi Chuhan. Composition is not so great and hook line doesn't work as much as "Gandi Baat" does. Do listen it for humorous lyrics and for Sunidhi Chuhan. Rating 2.5/5

4- Dhokha Dhadi - (Arijit Singh, Palak Muchhal): A beautiful melodious track, starts with guitar. It sounds like "O Rabba Main To Marr Geya" from Mousam but this one is sung by Arjit Singh and his vocals are simply superb. Palak Muchhal sounds very cute. Damn catchy. Rating 4/5

5- Kaddu Katega - (Antara Mitra): The track kicks off with some interesting arrangements. Antara Mitra sang the song superbly with her different voice and this time with nasal touch which was the demand of the song. It's a folk-ish track and is good. It must be a situational song and Pritam has done a good job here. Rating 3.5/5

7- Saree Ke Fall Sa (Remix) - (Antara Mitra, Nakash Aziz): A well-remixed track though we still find the original one better than that. Rating 3/5

NOTE: It's a desi masala album and a really good one. Pritam has not disappointed.