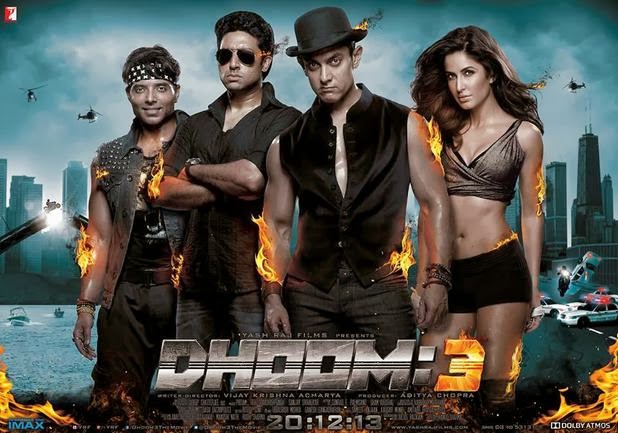 Dhoom 3 has shattered all previous box office records to record a 95 crore nett approx weekend. The previous record holder Chennai express had grossed 87 crore nett over three days and 93.50 crore nett if paid previews are included. The weekend breakdown is as follows:


Dhoom 3 has grossed a further 7 crore nett approx in Tamil and Telugu which takes the all language figure to 102 crore. Every circuit in India with exception of Nizam/Andhra and Tamil Nadu/Kerala has seen records fall. These two circuits are short of Chennai Express with the Hindi versions but had regional versions also playing.

Dhoom 3 has set a new benchmark as it has crossed the 200 crore mark for weekend collections worldwide. It is the first film to cross the enviable 200 crore mark. Chennai Express had grossed 160 crore approx in its first three days.
The gross collections in India are around 130 crore and Sunday figures for some markets in overseas are not available yet it is sure to be over 70 crore and could even go over 75 crore. The total should come in the range of $12 million.
The out performance in overseas is even bigger than in India. The India collections are just 9-10% bigger than Chennai Express but overseas collections are 60-65% higher with the film seeing records smashed by huge margins wherever released.
To have box office receipts of 200 crore plus across the world is just extraordinary. The feat is difficult to explain in words but the fact that Dabangg 2 which released exactly one year ago was the first film to hit 100 crore wordwide tells the story as Dhoom 3 has doubled that figure in just 12 months and that too with a holiday in the domestic market.
The unparalleled mark of 500 CRORE worldwide is on for Dhoom 3.