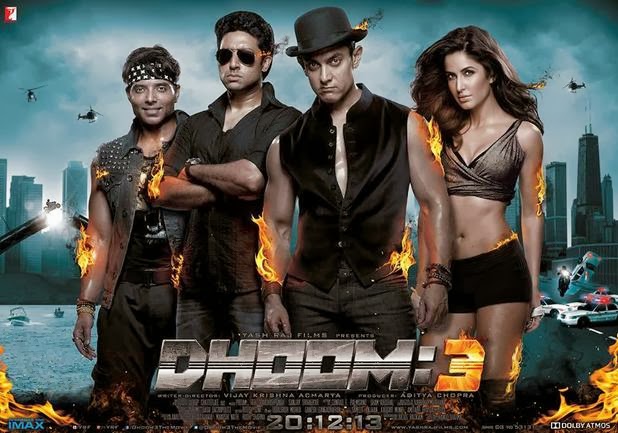 Expectations: Dhoom 3 is the biggest release of the year and expectations from the music album are sky high as it is the most awaited album of the year.

Pritam Ki Dhoom: Pritam is one of the most famous and busy music directors in the country. Whenever Pritam is compsing a music album, chartbuster songs are guaranteed. Pritam has composed the music albums of first two installments of Dhoom and now in third installment, he is composing first time for Aamir Khan. But this is not the only unique thing, the most important is Dhoom 3 is Pritam's album no. 100 as composer. Besides Pritam, this time the famous background scorer Julius Packiam has also composed a song and an instrumental piece.

So here's our review:

1- Malang - (Siddharth Mahadevan & Shilpa Rao): It's a 5-crore song; Most expensive Bollywood song ever and you feel it immediately when the songs starts. The composition has a Middle-Eastern feeling and Sufi feeling when it comes to hook line. Can we call it Arabic Sufi? The sargam which works as signature Dhoom tune is awesome. Siddharth Mahadevan, the son of multi talented Shankar Mahadevan, and Shilpa Rao, both are impressive. Lyrics are good. Rating 4/5

2- Kamli - (Sunidhi Chauhan): From the start, it feels that the track is inspired by Punjabi folk music. Clearly, Sunidhi Chuhan is at her best. Pritam has decorated the song beautifully. The music touches here and there, specially dubstep touch near the hook line, are amazing. Very interesting and intelligent arrangement. Lyrics are very good. Extra 0.5 points for Sunidhi Chuhan. Rating 4.25/5

3- Tu Hi Junoon - (Mohit Chauhan): Not a typical Pritam-ish song. He clearly tried to do 'Kuch Hat Ke' and he has done it with style. The track grows on you, so give it more chances before you decide not to add it in your playing list. Basic melody is catchy and has foot tapping beats. Mohit Chuhan sings the song with ease. Beautiful lyrics. Rating 3.5/5

4- Dhoom Machale Dhoom - (Aditi Singh Sharma): Everyone has listened it and mostly people are saying that the eralier Dhoom Machale-songs were better. Well, we found the new Dhoom song equally amazing and brilliant. No doubt that first Dhoom Machale-song was a smash and never-heard-type song in 2004 and in 2006, Dhoom Again raised the level of Dhoom at that level which was tough to exceed. But still, the new Dhoom song with amazing and vibrant beats impresses you, but if you have too high expectations, you will always be left disappointed. The vocals of Aditi Singh Sharma are brilliant. Rating 4/5

5- Bande Hain Hum Uske - (Shivam Mahadevan, Anish Sharma): If you want to have more from Mahadevan-family, here's the younger son of Shankar Mahadevan. A song sung by two children. Surprising! Beautiful tune, actually based on the shayeri you listened in the trailer. Background is beautiful and rhythm is really good. Rating 4/5

6- Dhoom Tap (Instrumental): First time a tap song is made in India. Tap is a form of dance characterized by using the sound of one's tap shoes hitting the floor (or other surfaces) as a percussive instrument. As such, it is also commonly considered to be a form of music. Two major variations on tap dance exist: rhythm (Jazz) tap and Broadway tap. Broadway tap focuses more on the dance. It is widely performed as a part of musical theater. Rhythm tap focuses more on musicality, and practitioners consider themselves to be a part of the Jazz tradition. The track impressed us a lot and Pritam has done a fab job here. It will be an experience to watch Aamir on big screen dancing on this tap number. Rating 4.5/5

8- Dhoom Machale Dhoom (Arabic) - (Naya): This version is sung by an Arabian singer, Naya. Lyrics are Arabic and sounds good. Little bit lazy singing, but not bad. The track is same just the lyrics and singer is different. You will surely enjoy it. Rating 3.75/5

NOTE: The album is simply awesome. Better than what we were expecting.