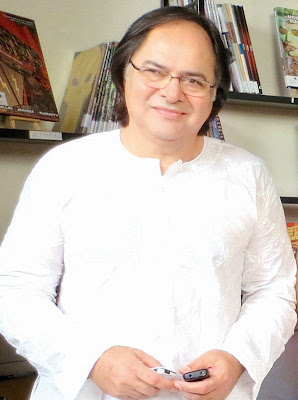 National Award winning and One of India's finest actors Farooq Sheikh suddenly died of massive heart attack. He was on a holiday with his wife and two daughters in Dubai.

He was best known for his work in Hindi films from 1977 to 1989 and for his work in television between 1988 and 2002. He returned to acting in films in 2008 and continued to do so until his death on 27 December 2013. His major contribution was in Parallel Cinema or the New Indian Cinema. He had worked with directors like Satyajit Ray, Muzaffar Ali, Hrishikesh Mukherjee and Ketan Mehta.

He had acted in many serials and shows on television and performed on stage in famous productions such as Tumhari Amrita (1992), alongside Shabana Azmi, directed by Feroz Abbas Khan, and presented the TV show, Jeena Isi Ka Naam Hai (Season 1). He won the 2010 National Film Award for Best Supporting Actor for Lahore.

Amitabh Bachchan: T 1336 – God !! Farooq Sheikh passes away !!? A true gentleman, a wonderful colleague ! A quiet honesty about him. Very very sad.. Cannot believe he has gone. There was an absence of any kind of pretence in his demeanour, or towards his work !!

Shekar Kapur: #RIPFarooqShaikh The last time we met, we talked politics. I wish we has talked film and acting. Its what we love most. I would have learned.

Arshad Warsi: Really sad to hear about Farooq Sheikh, admired him as a person and as an actor… RIP Farooq Sahab.

Aftab Shivdasani: Rip Farooq Sheikh sahab.. A wonderful gentle soul and a thorough gentleman.. Prayers and condolences for his family.

Ali Zafar: Had the good fortune of meeting Farooq Sheikh sahab& step in his shoes for Chashme Baddoor. He gave his blessings.

Sonu Sood: A man with a smile always on his face, a true gentleman. Farooq sheikh sahib. U will be missed. #RIP

Kapil Sharma: Farooq sheikh ji passed away.. Very sad.. I met him last week in delhi.. Cnt believe he is no more.. RIP

Rahul Khanna: Sad news about Farooq Sheikh. Such a talent is rare & such a thorough gentleman, even rarer. What a great, premature loss.

Reteish Deshmukh: Shocked beyond words - Rip Farooq Sheikh - you will be missed sir.

Boman Irani: Farooq Sheikh passes away! Shocked, numbed and saddened. Was supposed to be shooting with him today. A gentleman actor is no more!

Payal Rohtagi: Heard Farooq Sheikh ji passed away. Life is so unpredictable. Lets have love and forget the hatred. RIP Farooqji . May God bless your soul.

Neha Dhupia: Woken up to the tragic news of yet another icon passing away .. R I P Farooq Sheikh Sir .