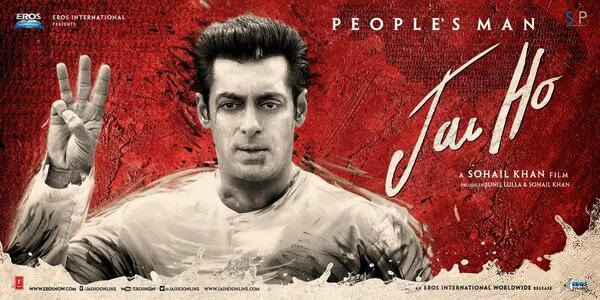 Jai Ho grossed around 7.25 crore nett taking the five day total to a little over 74 crore nett. The first week will finish around 85 crore nett as the next two days should add around 11 crore nett with a 15% drop on each day.

The second weekend is very important for it to put up a good to decent final total. A 150 crore nett total is very difficult however the film is in a better position than the first two days where the film looked heading towards a little over 100 crore.

There is just one film One By Two releasing this week and that will not be much competition so that Friday total and Saturday growth will tell where the second week is going. At the moment the film is trending towards a similar total like Ready but a big Saturday and Sunday this week can take it higher than Ready which grossed 120 crore nett approx.

The overseas opening of Jai Ho may look a bit low due to the sort of business that Dhoom 3 and Chennai Express have put up but its in the range of the biggest Salman Khan openers in Overseas. Just $500,000 less than his biggest opener Dabangg 2 which was a Christmas release.

There is an excuse for Ek Tha Tiger as that was released pre-eid and did dull dull business in some some markets due to Ramadan. Jai Ho is a January release and January is being considered as the most dull month of the year in overseas market.

Below are the top openers of Salman Khan in the overseas market and the top four of Dabangg 2, Bodyguard, Ek Tha Tiger and Jai Ho are clear of the rest: