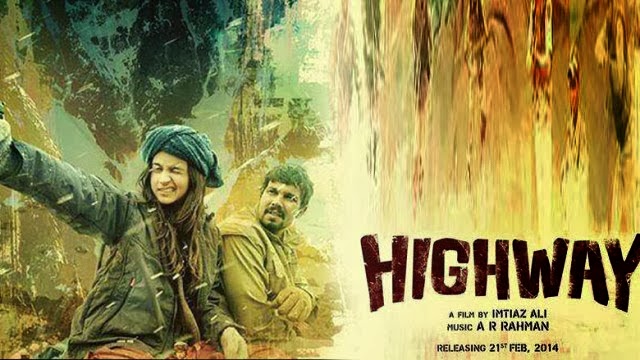 Expectations: A.R. Rahman; The living legend.. The name is enough. You always expect something brilliant from the man and he almost never disappoints. Rahman & Imtiaz Ali met last time and 'Rockstar' was created. Let's see what they offer this time. We are excited and thrilled.

3- Kahaan Hoon Main - (Jonita Gandhi): Starts on slow but strong notes. Jonita Gandhi is an Indo-Canadian vocalist who has earlier sung for Shahrukh Khan starrer Chennai Express but went unnoticed. This time, Rahman has given her a new life line. Jonita Gandhi's voice brings a freshness to the track and her singing is top notch. The track is very slow, smooth and powerful. Rating 3.5/5

4- Wanna Mashup? - (Lady Kash, Krissy, Suvi Suresh): An English track. Very youthish with lots of techno elements. Superb singing by the singers. People who like modern English music, are going to love the track. Give it a try anyway. Possible you end up liking it. Rating 3.5/5

5- Sooha Saaha - (Zeb, Alia Bhatt): A slow, beautiful lullaby song. We were excited to listen Alia Bhatt and we have to admit that she did a really good job considering the genre and slowness of the song. Zebunnisa Bangash (Zeb) and Haniya Aslam are Pakistani pop singers from Kohat, Khyber Pakhtunkhwa, Pakistan. Zeb is singing her second Bollywood song after Ajnabi (Madras Café) last year. And she carries it off superbly. The underlying layer of strings goes a long way in making this song the beauty that it is. And the soft flute strains, the ukulele-strumming by Haniya Aslam of Zeb and Haniya. Rating 4.5/5

6- Patakha Guddi (Male Version) - (A.R. Rahman): Awesomeness! An interesting combo of guitars and harmonium accompanies A R Rahman in this one, before the dholaks kick in taking the song to qawwali mode for a brief while, again around the title hook. But just after the middle of the song happens the real twist – Prasanna Ramaswamy with a minute-long solo (probably the first time the man is playing a non-carnatic piece for Rahman) while A.R. Rahman takes the backseat, chipping in with the occasional chants. And just like that it is done, the song continuing on as if nothing happened, ending pretty much the way it started. Expect the lyrics there are no other common points in the male & female versions. You can't give it a skip. Rating 4.7/5

7- Implosive Silence - (Jonita Gandhi): An instrumental track. The track gave us the impression of a corrupted version – it sounds quite like a track in reverse! Then we read Rahman’s note on the track – “a musical piece that tries to capture the sounds in Alia’s character’s head” – and it started making sense, the muted humming and everything. Very esoteric-sounding this, one that should make for a very interesting watching in the movie. A. R. Rahman makes a nice shift in ambiences during the track and ending it with a very nice off period during last 30 seconds. Rating 3.5/5

8- Tu Kuja - (Sunidhi Chauhan): A Sufi song. Soulful singing by Sunidhi Chauhan. The instant Sunidhi begins the song, it makes a heartfelt connect. Irshad Kamil deserves a lot of praise for meaningful and heart-touching lyrics. The arrangements are classic A.R.Rahman style. Listen it for Sunidhi Chauhan and Lyrics. Rating 4/5

9- Heera - (Shweta Pandit): Shweta Pandit soulfully crooning Sant Kabir’s dohe to a soothing arrangement. An arrangement that sees some fabulous violin solos and tin whistles and santoor sounds layered over a glorious expanse of strings. At times we were unable to grasp the meaning of this song, yet it was a peace to ears. Perfect ending. Rating 4/5

Note: Highway Music Review turned out to be a pleasure and perfect delight for our ears.

This review is written with the input from Vipin - Musicaloud.com