Akshat's Got Talent; At The Ellen Show! 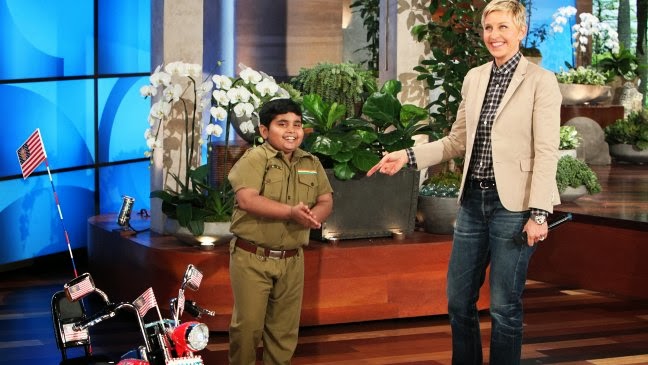 We've earlier reported about India's Got Talent fame Akshat Singh participating in The Ellen Show (Here). Now, the reports say that eight-year-old prodigy Akshat Singh struck it big on his first visit to the States.

Akshat Singh made his debut on Ellen riding a toy motorcycle and dressed in an Indian police outfit, emulating the main character and his idol in the Bollywood Salman Khan's movie Dabangg. After the music began, the 8-year-old broke out into handstands, flips and his signature pelvic-thrusting dance moves that first caught the attention of his fans.


The talk show host greeted the young boy who arrived from Calcutta, India, for one day speaking a few words of Hindi. "Namaste, mera naam Ellen hai" (Hello, my name is Ellen). She also told the viewers that Akshat had to perform to a different song than on India's Got Talent because they could not get permission to use the song.

When asked if he thinks he will win the semifinals, Akshat Singh replies in rough English, "I've gone to 'India's Got Talent' to show that 'motus' [chubby people] can also dance. I dance every day for three hours, and I eat more," he joked, drawing loud laughter from the audience. He added a phrase in Hindi, which his translator said was "If there's no gas in the car, how will the car run?"

Akshat Singh first generated the attention to his dance moves from a home-made video his family posted on YouTube, showcasing his talent in his underwear.