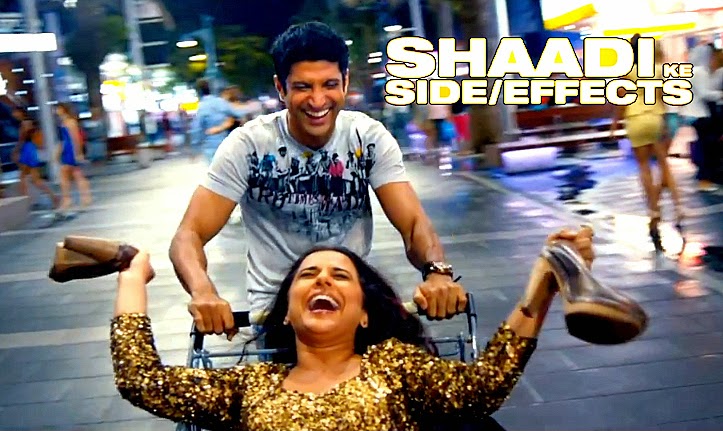 SHAADI KE SIDE/EFFECTS is more about rediscovering your partner, post marriage. The fact that Saket borrows from real-life instances makes it relatable and identifiable. The connect is tremendous, with the spectator often drawing parallels with his/her life. On the whole, SHAADI KE SIDE/EFFECTS is a delicious take on contemporary relationships. This one's relatable, heart-warming, amusing and thoroughly enjoyable! Rating 3.5/5


The director strikes a fine balance between humour and emotion in this slice-of-marriage story. The first half takes a while to catch up, but the dialogues (Arshad Sayed) provide ample laughs, while giving wisdom for wedded bliss. Vir Das in his funky avatar is a riot. Vidya is brilliant and hits a high note in the emotional scenes. The film belongs to Farhan who stuns you with his straight-faced witticisms and plethora of expressions that amuse and move dramatically. Single or married, this film will have more of a 'special effect' than 'side effect' on you. Rating 3.5/5


Shaadi Ke Side Effects is one film that feels better suited to be enjoyed at home. It does not feel like a big screen cinematic experience. Saket Chaudhary is not able to take his promising premise to the next level because of the tonal clash of the first half and the second half. If you have not watched a film in a long time, then the film could make for a lazy viewing. Rating 2.5/5


Shaadi Ke Side Effects, via the words of Ranvir, hands out some dodgy pop psychology to justify a somewhat far-fetched ‘formula’ for a happy marriage.Shaadi Ke Side Effects isn’t exceptionally engaging fare. It is essentially a single idea stretched to the very end of its tether. Yet, the sheer ordinariness of the circumstances that the story hinges on helps the film retain its amusing core. Shaadi Ke Side Effects is recommended because, despite its flaws, it is passable fun while it lasts. Rating 2.5/5


Watch Shaadi Ke Side Effects for Farhan Akhtar and Vidya Balan’s sparkling performances and Saket Chaudhary’s earnest attempt to tell a really different story. Surely, the movie has no dull moments to complain about, but its over-stretched plot surely kills a potentially brilliant brainchild. Rating 3/5


Shaadi Ke Side Effects (SKSE) opens on this contrived note and meanders for an over-stretched 145 minutes, full of twists and turns, that one has come to so famously associate with soaps produced by Balaji. Chaudhary has, at times, over-simplified the complex issues married couples face (sharing of parental responsibilities) and, at times, over-amplified the way these strange creatures (read married couples) react to facts of married-life, like pregnancies. Rating 3/5


While the going is good, ‘Shaadi’ is fun, and real, and has some nice laugh-out-loud situations which the leads make the most of. But marriage takes two, and the tango here is only from Sid’s perspective : how about showing us what it could be like from Trisha’s ? So naturally the film belongs more to Farhan, who plays it straight and true, even when he is being asked to do the most improbable stuff. Vidya is competent but limited, which could be down to the way her character was scrunched. I really liked the climax, though: how about the next one starting from where this one ends? Rating 2.5/5


But what was most heartening about the film was that Vidya and Farhan kept the screen alive for most part of the first half, without even a third actor on screen! SHAADI KE SIDE EFFECTS started out with a lot of promise but like a talented cricketer, overburdened with sudden fame, soon died out. Rating 2/5


The best part about the first half of the film is that there is hardly any drama, all the good scenes are random, on-the-spot incidents backed by good writing and acting. But all that was avoided in the first half was obviously saved for post interval. After the popcorn break, the humour is almost over and there is just drama which stretches till the end of the film. Though the director did manage to deliver a decent film, it could have been much better. The first half is funny and filled with superb humour. The film dips in the second half and is way too lengthy for this genre. Nevertheless it's a decent watch! Rating 3/5


Every once in a while there comes a film that is mostly clichéd and utterly predictable, and is yet difficult to hate because its leads are so darn likable. Shaadi Ke Side Effects is one such film. Still, the film’s blunders are outweighed by its goodies, a big one of which is Ram Kapoor as the Perfect Dad who keeps making Sid jealous. There are a handful of solid giggles, and the film cleverly pushes the right double standard buttons to outrage both sexes, and ties it all up with a neat little bow in the end. That kind of balance is rare in Bollywood, and for that the film merits a definite recco. Rating 3/5


The vivid and sparkling chemistry of Vidya and Farhan manage to hold you through tight and still. However, in the second half, the film begins a journey downhill, slipping vigorously slide by slide, getting schmaltzy quite unjustifiably. But in the end it still manages to deliver a product that is overall a surprising winner of sorts. Hence I am going with a lenient 3/5 for this film that deteriorates into settling for being average in the second half but for the stellar first hour cannot be missed. Hopefully Saket’s next is something more cleverly coherent and mostly consistent without getting convoluted . Till then keep your expectations low and give this one a chance to entertain you! Rating 3/5


it’s the chemistry between Balan and Akhtar that keeps this romantic comedy tingling. They have an effortless chemistry and we buy into their marriage madness primarily because of their acting muscles. While it’s engaging and non-preachy for most parts, it’s best if you don’t question how Sid, who plays a struggling musician, affords that slick lifestyle and a nanny in a single income household. If you can forego such practicalities, you are good to watch Shaadi Ke Side Effects. Rating 3.5/5


If only the makers could have thought up a better second half, this could have been a winner. While still watchable due to the novelty of Farhan and Vidya pairing up, and the everyman status of Farhan`s character that everyone can relate to, it fails to live up to the cult status that Saket Chaudhary achieved with `Pyaar ke...`. Rating 2.5/5


The side effect of Shaadi Ke Side Effects is that it has a sexist tone. Sid is not only the main lead but also the narrator of the film. So we get a very lopsided view, only the man’s take on marriage. It’s like Kapil Sharma's brand of humor on celluloid. Also, the film deals more with parenthood than marriage. It could have been called Shaadi Ka EK Side Effect - Parenthood. Since the film is light-hearted in nature and doesn’t promise to be a serious guide on happy marriages, it becomes a breezy watch. Rating 2.5/5