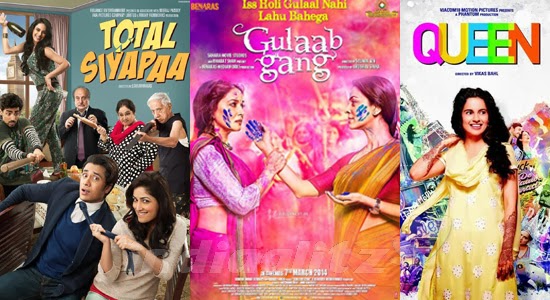 Queen showed the best growth on Saturday as it collected around 3-3.25 crore nett with growth of around 75-80%. Still despite the huge growth collections are not impressive as day one was too low. Every center has shown an upward trend, which sets up the film well for a strong Saturday. The word-of-mouth is by far the best for any film this year, and this was pretty evident from the way the film has grown from its opening day. Looking at the way the film has opened on Sunday, all India business is likely to be 4-5 cr. The weekend total should be in the 9-10 cr range. Weekdays will then decide if the film can attain its much-deserved HIT status.

Gulaab Gang also managed to show good growth as it collected around 2.75-3 crore nett. The growth was around 40% but its the same story as Queen with opening levels being too low. Both Queen and Gulaab Gang have grossed 5-5.25 crore nett approx in two days. Looking at collections from a few centres of the morning shows on Sunday, Gulaab Gang is likely to collect around 9.25 crore in its first weekend, which will be lower than the weekend total of Madhuri’s last release Dedh Ishqiya (10.77 Crore in 3 days).

Total Siyaapa showed the least growth as it collected 1.25 crore nett on its second day taking its total to around 2.25 crore nett. The film has performed better in Delhi city and East Punjab but even there collections are still dull.