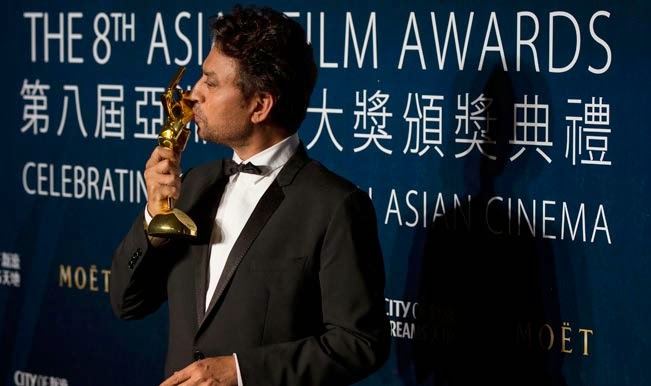 Bollywood actor Irrfan Khan was handed over the trophy for best actor at the eighth edition of Asian Film Awards (AFA).

Irrfan, who has displayed his acting prowess in films like Maqbool, Life of Pi and Paan Singh Tomar, won the Best Actor award for his role in The Lunchbox at the ceremony held on March 27. He was up against Song Kang-ho, Lee Kang Sheng, Fukuyama Masaharu and Tony Leung Chiu-Wai.

“It’s a great honour to be nominated alongside an actor like Tony Leung Chiu-Wai (The Grandmaster) and winning,” the Indian actor said in a statement.

The Lunchbox director Ritesh Batra also received an award for Best Screenwriter. The movie was nominated in the Best Film category as well but lost to The Grandmaster.

Inaugurated in 2007, AFA honours filmmakers with outstanding achievements in the field of Asian cinema. It brings together the best cinematic talents of Asia, film fans and professionals from all across the globe.