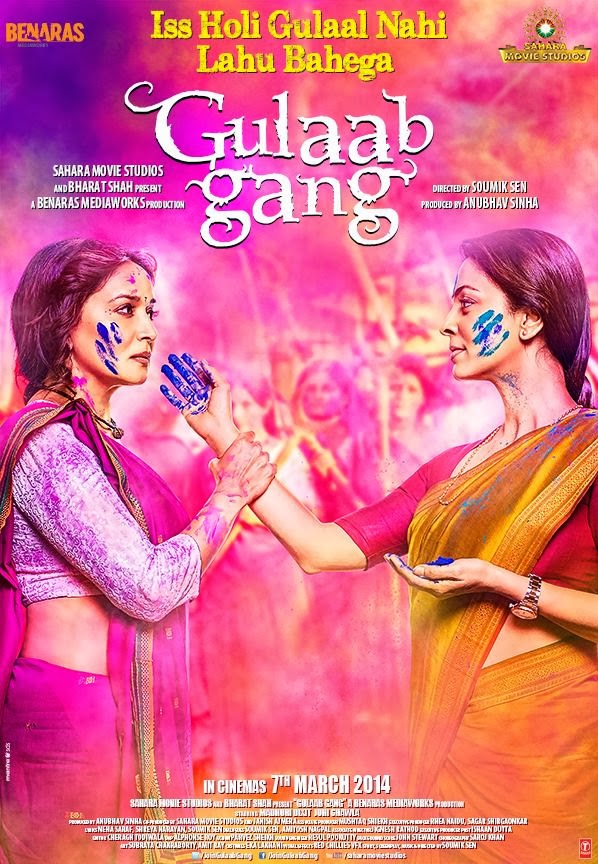 Although GULAAB GANG raises a strong voice against years of patriarchal pain and suffering -- one might assume it tilts towards arthouse cinema -- the fact of the matter is, Soumik presents the classic conflict between good and evil like any other masala film, replete with high-voltage drama, song-and-dance routine and of course, action sequences. On the whole, GULAAB GANG is well-intentioned with several powerful moments, especially towards the second half. The game of power and politics is well captured too. Additionally, the bravura performances of Madhuri and Juhi add immense weightage to the film. Watch it! Rating 3.5/5


Gulaab Gang has been made with the aim of showcasing womanhood and the power of women in India, but all the gyanbaazi comes across as fake and hypocritical. At the end of the film what we are left with, is a moving montage of real life inspiring women and Juhi Chawla’s fantastic performance. If you really need to know about the story of Sampat Pal and her world famous Gulab Gang watch the documentary Gulabi Gang instead. Steer clear of this half-baked attempt at showcasing Gulaab Gang’s journey. Rating 2/5


There are too many tangents, navels and nose-rings, diverting focus from Rajjo, the story's driving force. Instead of knowing how and why she becomes the tigress of Madhavpur, we're given mellifluous songs, intercut with soon-repetitive scenes of exploitation. Considering the subject's intense power and the charisma of these stars, the movie's hesitation with how to proceed stands out. At one point, Rajjo asks a woman, "Soch soch ke kaahi maarte ho?" That goes for Gulaab Gang too. Rating 3/5


I: Madam does look menacing but don't you think— She: Sometimes, it is necessary to be overdramatic. This is for the masses after all. I: Point. But carrying sickles and hammers? I didn't feel—  She: What else do you critics want now? A Jai Ho song? A bloody climax? Real victims' pictures? I: All three are present. Still, don't you think a plot would have— She: Everything was a plot! The plot to kill, to take revenge, to fight elections, to use two superstars. Rating 1.5/5


Director Soumik Sen’s casting coup has not been wasted, we must say. Yes, the film is based on the life based on the life of activist Sampat Pal and there is a particular scene in the movie, which is based on true events. We wish he had acknowledged Pal’s movement in some manner or the other. That way, the film would have stayed away from the unnecessary controversies. That apart, Sen surely deserves a pat on his back for choosing a subject of serious concern. Talking of the shortcomings, having way too many songs in such a serious film is not happening at all. There’s a song at every juncture, which might irritate you a bit. No complaints other than that. Rating 3.5/5


Women who weave their own pink saris and are determined to put all pigs in their place, even if they are in the make-believe world of Gulaab Gang, should be the last people to enforce a stereotype that Hindi films have perpetuated for decades. Women, Madhuri and Juhi included, certainly deserve better. Rating 2/5


Gulaab Gang is director Soumik Sen’s debut, based on a story he has written, and he has clearly worked hard on the film. Unfortunately, taking on the responsibilities of screenplay and dialogue as well have worked to the detriment of the director. Here, she is saddled with a flawed script; something that she is not able to rise above. Also, for a film that is about women who have risen above their harrowed circumstances to help society. Rating 2.5/5


Much was expected from this GULAAB GANG, but it falls flat right from the beginning. Poor writing and weak screenplay let the film down terribly. Add to it some over-the-top acting. All these are major hurdles that never allow the film a decent, seamless flow. Even the villains are cartoons with no meat in their acting and no menace in their attitude. As such, the movie plods on like a boring documentary. Rating 1/5


Madhuri Dixi’s gang, on the other hand, is as make-believe as make-believe can get. ‘Gulab Gang’ is faking it. But from its opening frame you discover that in its supposed feminist garb, ‘Gulab Gang’ is actually the old-style good vs evil story, styled in the tired way these films have been for the longest time. How can you take a film seriously when each bout of `lathi’-clashing is interspersed with group dances, with Rajjo-Rani doing the familiar Dixit` latkas’ and `jhatkas’? Rating 1/5


Gulaab Gang is nothing but an over-dramatized, over-filmy depiction of a potent as well as pertinent group of women who are toiling over the derogatory state of affairs of women in rural India. But the good part about the film isn’t its noble intention but the sputtering chemistry of Madhuri Dixit Nene and Juhi Chawla that makes it a film worth investing on. Though Chawla soars in her stronger portrayal, Madhuri’s indomitable conviction of delivery wins just as much. For them alone, watch and applause it. Rating 3/5


Overall, ‘Gulaab Gang’ may not be a typical film meant to taste success at the Box Office. The film does speak about issues that need urgent attention, but may not be enough to draw people to the theatres. But Juhi Chawla’s performance in the film isn’t worth a miss. So watch it for her. Rating 3/5