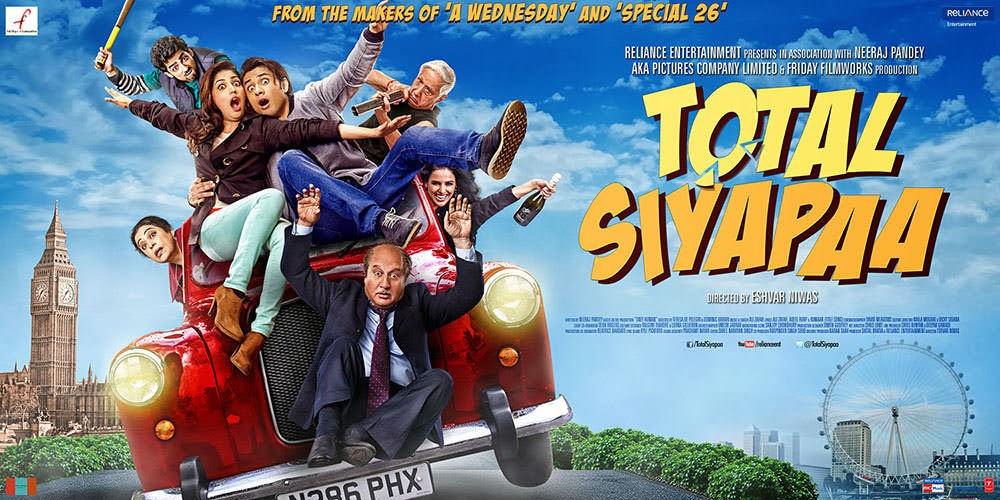 While the promos of the film prepare you for a laugh-riot, what unfurls on screen doesn't keep you in splits through and through. Initially, yes, the humor works, especially when Ali meets his prospective mother-in-law Kirron Kher, but thereafter, a few sporadic instances apart, several episodes fall flat. On the whole, TOTAL SIYAPAA appeals in bits and spurts. You expect a laugh-riot, but what comes across on screen is half-baked. Rating 2/5


Coming to the film, the makers have literally lived up to the name – it’s a completely chaotic plot with very few comic punches that will leave you in splits. What’s disappointing is the fact that Total Siyapaa has some really good moments but it fails to sustain it till the end. Just when you feel the movie would go to another level, it doesn’t. Though the second half is a tad better than the first, overall Total Siyapaa falls flat when it comes to entertainment quotient and that’s the reason why you might just regret stepping into the theatre. Rating 1/5


Despite the giddy pace, it soon becomes clear that there's not enough of a story here, merely a string of gags. The thin plot is stretched out until it collapses under the weight of its contrivances, squandering a good cast, particularly Kirron Kher as the shrill Mummyji. Such a shame that the film's central conflict evaporates conveniently and unconvincingly in a hurried, all-too-neat finale. I'm going with two out of five for Total Siyapaa. Funny, but in a pedestrian sort of way. Rating 2/5


There are a few superbly funny moments in Total Siyapaa, which is about the rocky romance between an Indian girl and a Pakistani boy. But few is the key word here. There is much humor to be mined from our fraught relations with our neighbor but Total Siyapaa is an opportunity lost. I’m going with one and a half stars. Rating 1.5/5


E. Niwas' story (adaptation of Spanish rom-com 'Seres Queridos') shows flashes of madness peppered with some 'LOL' dialogues, but the screenplay (Neeraj Pandey) is insipid and loses its comedy metre too often to entertain throughout. The plot had potential to induce much more hilarity (picture this: a dabba of frozen soup could change Aman's love life!), but it quickly deflates. Rating 2.5/5


This is the same director who gave us such different films as ‘Shool’ and the underrated ‘Love Ke Liye Kuch Bhi Karega’, and you would think some of that surety would be transferred to this new venture. But this one is a mess, and worse, it is dull. This could have been hilarious. But all it does is drag its feet through unfunny, stretched situations. Zafar’s only job is to look befuddled, which he manages quite well. Gautam belies the promise she had held out in her debut ‘Vicky Donor’. Rating 1.5/5


Watching Total Siyapaa took me back to this amusing memory NOT because I could relate to it but since the film is so insipid, it implores your mind to wander off every few minutes.The problem lies elsewhere. It’s the kind of film that expects you to find laughs in a man trying to thaw ice-cold soup with knives.Establishing characters in stories, coursing through a span of few hours or a day, is not possible without sharp, insightful writing. And Total faux pas does not deliver any. Rating 2/5


Instead the film turns into an unfunny comedy of errors. One misfortune after another befalls Aman who finds his day getting worse as he is humiliated and insulted by Asha's family. There is no consistency in the plot either. Total Siyappa comes across as a poor attempt to marry the films Guess Who's Coming to Dinner and Meet the Parents. Rating 1.5/5


A lot of the humour simply sags in soggy lumps. There is a distinctly 'European' flavour and fervour to the unravelling of the comic mode in the dysfunctional family's life.The film comes to an inglorious halt with one of the character's stumbling home in a dazed condition, much in the same condition as the plot. But there is a lot that goes in its favour. Total Siyapaa is total madness. An audacious comedy that dares to poke fun at a border issue, the film is stylised and is attentively staged. Rating 3/5


Total Siyapaa is a must never watch degree of boring film. Despite being framed on a lush and interesting premise there wasn’t enough steam to drive it forward. With a limp screenplay, lacking in sprightly moments, this film is droopingly dull and horribly bland. I am appalled to see a lame affair like this coming out of Neeraj Pandey’s banner. Rating 1/5


Total Siyapaa was intended as a comedy of errors, but there were too many subtexts and characters crowding the second half. While the film managed to tick all the offensive stereotype jokes, the long-winded second half scratches out their efforts. Watch this only if you are a total fan of Zafar, Gautam and the Khers. Rating 2/5