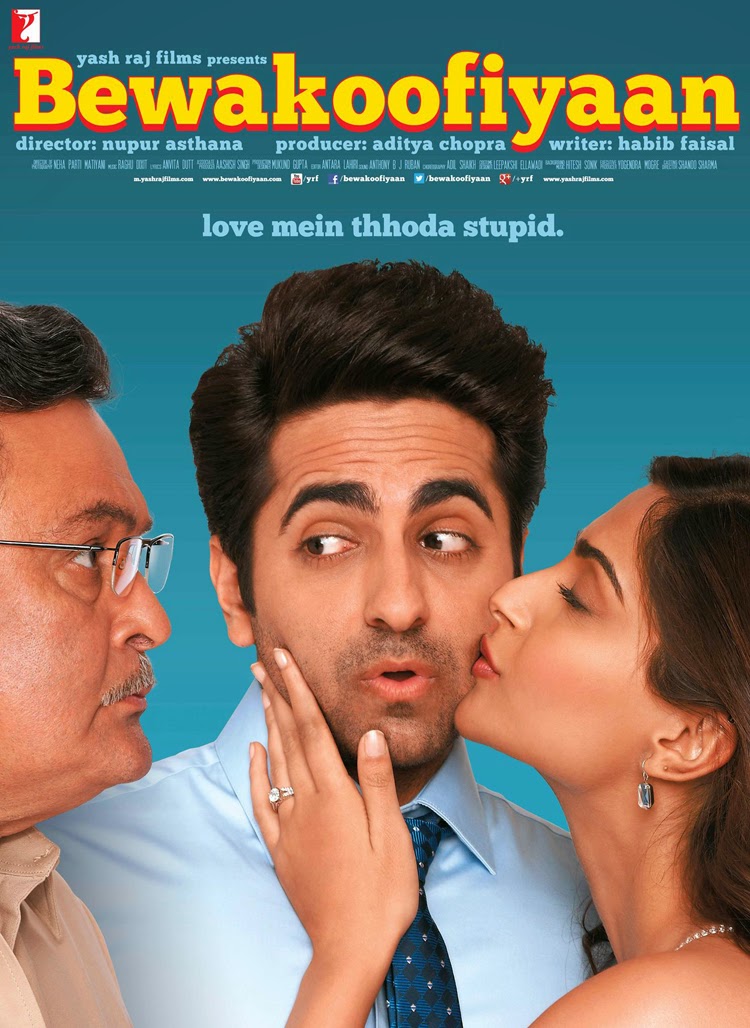 BEWAKOOFIYAAN brings back memories of Anubhav Sinha's AAPKO PEHLE BHI KAHIN DEKHA HAI and Rahul Dholakia's KEHTAA HAI DIL BAAR BAAR, besides FATHER OF THE BRIDE and MEET THE PARENTS. It won't be erroneous to state that BEWAKOOFIYAAN makes a genuine attempt to entertain beyond tested flavours and it succeeds in evoking genuine laughs at regular intervals. On the whole, BEWAKOOFIYAAN springs a pleasant surprise. Watch this wonderful slice of life film for the super performances of Rishi, Ayushmann and Sonam, watertight writing, skilled direction and dollops of humor. Rating 3.5/5


Bewakoofiyaan is a light-hearted entertainer that starts well, has plenty of dull moments in between, picks up pace in the beginning of the second half, drops pace again with all the unnecessarily twists and finally ends with a climax that leaves a smile on your face. If you walk-in expecting a film that focuses on how recession can affect young budding relationships, you’ll walk out disappointed, as Bewakoofiyaan is more about how Mohit manages to convince Myrah’s father. In fact, Rishi Kapoor has about the same screen-time as Sonam, or probably even a little more! Rating 2.5/5


Nupur Ashthana's rom-com has its moments; the coolest scenes are with Sehgal and his to-be son-in-law. The film needed to invest in wittier writing (Habib Faisal), more chemistry and a tad more comedy to make it a heartwarming love-story. The couple lack chemistry, and they fight and make-up quicker than a quickie. Even the music is unexciting. 'Bewakoofiyaan' has its khoobiyaan but mostly it has majbooriyaan where the story is concerned. It tells you not to overspend. Yet the script is not as 'penny wise', gettit? Rating 2.5/5


Yet given the lumbering job market across India, it's unsettling to see how casually the most serious aspect of this script is marred by one too many distractions. That's the trouble with the watchable but dispensable Bewakoofiyan. It never quite establishes its chief motive. Instead Asthana's tentative approach struggles to interrelate the pertinent issues, lend it dimensions and wisdom, resorting to simplistic conclusions when it cannot find the balance. Rating 2.5/5


Bewakoofiyaan is only for the incurable romantics, who wanna watch happily ever afters. To those who are seeking some action, thrill or sex-comedy, this one’s not for you. While the new generation is likely to enjoy this movie more, Sonam Kapoor and Ayushmann Khurrana’s Bewakoofiyaan can be watched by anyone with anyone. It’s a long weekend and if you have no plans, you can buy a tub of popcorn and watch Bewakoofiyaan. Rating 3/5


This is the kind of middling film that one doesn't know what to make of. It looks clean, simple and doesn't boast of any highs or lows. Everything, including the change of heart(s), is predictable. To be fair, the screenplay doesn't aspire to blow your socks off. Even director Nupur Asthana (Mujhse Fraaandship Karoge) seems to have made her peace with that. Rating 2/5


Bewakoofiyaan is a genteel, slice-of-life love story that runs with one of the oldest of the standard devices of the genre – strong parental opposition to a proposed marital liaison, with money, or rather the lack of it, playing a big part. But the film does not turn either overly nonsensical or sickly sweet in an ill-advised pursuit of comic effect and cutesy twists. The drama is easy flowing and the romantic track believable. Bewakoofiyaan scores with its disarming simplicity. Even as it doesn’t soar to dizzying heights, it is never less than watchable. Rating 3/5


Even if the director Nupur Asthana is asked to review this film, she will not give more than 2 stars to it. The problem is not with the direction or script, the concept is boring. Bewakoofiyaan is a break up, patch up saga which entertains and bores in parts. If you are under 30 and have nothing better to do this weekend, Bewakoofiyaan is the film for you. Rating 2/5


This one could also have been called “How to knit a grim subject like recession in a frothy Yashraj rom com and not go anywhere with it”. Done well, it could have been revealing and rewarding: how does a guy feel when his girl gives him a hand-out; how does a girl feel when she has to keep doing it and not let him feel like a loser? But ‘Bewakoofiyaan’ spends most of its time trying to showcase a slew of brands, get us to smile at the antics of the father of the bride which are singularly unfunny, and to convince us that its leading lady can helm an entire film. Rating 1/5


Love in the time of recession! Bewakoofiyaan is a simple love story about a couple that has to battle not one but two villains to make their relationship work The second half is a cat and mouse game between Rishi Kapoor and Ayushmann as both try to outsmart each other. Unfortunately there isn't much for the actors to chew on with a wafer thin plot that offers very little scope to grow. Bewakoofiyaan had the opportunity to be smarter and funnier, unfortunately it plays it too safe to rise above the ordinary. Rating 2.5/5


BEWAKOOFIYAAN is a love story that is handled with maturity, and although there are a few 'unbelievable' scenes (like the one where Mohit keeps going to his work place to 'play act' to fool Mayera's dad), the youth will relate to it. It's light, simple and uncomplicated. Straight from the heart! Rating 3/5


The damp chemistry of Ayushmann and Sonam who doesn’t quite match up the expected level of romantic blend expected of their characters.It took me great patience to like the film and that cannot be a good news for any viewer. Was it all worth it? The answer is both affirmative and negative in equal parts. As entertained as you’ll be with Rishi Kapoor doing a magnificent job as Myrah’s dad, it is the not so mesmeric chemistry that inflicts irreparable harm to the film. Watch it for fun simply. Gauging beyond will disappoint. Rating 2.5/5


The fights among this seemingly happy, well-adjusted couple are real. But the sad part is that their conflicts surrounding rows about money are toned down. Instead, what’s highlighted is the disapproving dad scenario. While Kapoor and Khurrana played their parts to perfection, it was difficult to buy into their love story. What’s also unbelievable is the sudden turnaround by the terror-inducing dad. The villain becomes an ally of love. But as long as you don’t analyse it too much, Bewakoofiyaan (which means Stupidities) can make for a fun watch. Rating 3/5


The film could have been a modern rom-com dealing with issues of the recession, over-bearing parents, changing love equations etcetera. But what you get are good-looking actors, a few immersing moments, and an amusing sitcom episode at best. Rating 2.5/5