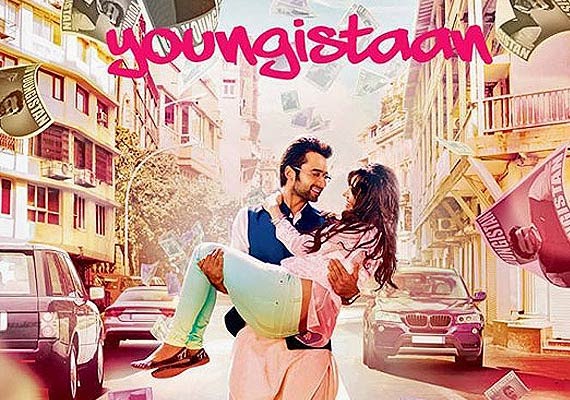 YOUNGISTAAN looks at scheming politicians, driven by a greed for power and who try to pull the rug from under the feet. The storyteller also borrows episodes from real life -- some characters bear a striking resemblance to real-life politicians too -- making the spectator relate to the proceedings. The ambience is pitch-perfect, the feel is just right, the upheavals in the life of the young politician are illustrated wonderfully at times. On the whole, YOUNGISTAAN has an interesting premise, a mature act by Jackky Bhagnani and importantly, the message it conveys is just right. The writing could've been sharper, but having said that, this movie is worthy of a watch. Rating 3/5


Jackie Bhagnani is able to emote well and his vocal skills have definitely improved by leaps and bounds. Neha Sharma is a stunner and it is a shame she has not been signed on for bigger films. She deserves better films. Farooque Sheikh keeps the film together with his impeccable acting, you can’t help but miss him and his talent now that he is no longer with us. Youngistaan makes for interesting viewing, and makes some valid points and also entertains the viewer along the way. Youngistaan should be watched for what it offers and not for what we want it to offer. Rating 3/5


Youngistaan starts off promisingly as a fish-out-of-water comedy about a carefree, 28-year-old who is thrown into the messy world of politics when, after the death of his father, he’s roped in to replace him as Prime Minister. By the end, Youngistaan spirals into an abyss of predictable plotting, as Abhimanyu learns the tricks of how to succeed in politics. It’s all unnecessarily stretched out, and co-writer/director Syed Ahmad Afzal brings nothing by way of original treatment or even radical resolution.I’m going with two out of five. There was potential here, but it’s wasted. Rating 2/5


Every other year or so, Vashu produces a film in which Jackky stars. These vanity projects have been uniformly mediocre but their fifth film together, Youngistaan, sets a new standard of ridiculous. The premise had the potential for drama and humor but Youngistaan is just an incoherent mess designed to make us fall in love with Jackky, who is in almost every frame. Otherwise Youngistaan is brain-dead and largely insufferable. I’m going with one star. Rating 1/5


If you watch it with a practical mind, everything about the film is far too exaggerated. Be it the love without any fights or the Indian politics. It’s really difficult to bring in change in a diverse country like India. Jackky has done a decent job in the acting department but Neha needs to improve. In some scenes, we can’t help but notice how hard she is trying to act or fit in the shoes of her onscreen character. Well, you can watch Youngistaan this weekend if you have time. The movie is not all that bad. If it had a more powerful star cast, Youngistaan would certainly have had a different fate. Rating 2.5/5


All of these little threads and a few other intrigues make ‘Youngistaan’ an interesting watch, but only up to a point. After a while, the pace slackens, and the focus gets diluted. But instead of building on it, and opening meaningful dialogue on thorny issues (are ‘live-in relationships’ bad things; how the personal becomes public, and so on), it all becomes improbable and a tad costume-drama amateurish. Rating 2/5


'Youngistaan' at the core is an interesting idea, far-fetched, but refreshing. The love-story develops tenderly, but the political backdrop and ensuing drama is not crafted with clarity. The story suffers from uninspiring dialogues, with a stretched climax. It's a well-intentioned drama which vibes with the current political scenario and upcoming elections.The young generation will truly miss this performer par excellence. With a heavy heart...adaab, Farooksaab! Farooq Shaikh, enacting the last screen role of his life. As always, using his warmth and acting prowess to deliver a great performance 'Youngistaan' isn't the perfect concoction of love and politics, but worth one 'shot'! Rating 3/5


This script must have looked great on paper and it had huge potential too. But it's the shallow treatment that seems to have killed the spirit of the script. Watch it once if politics turns you on, and with election fever in the air, this seems like just the right time too. Rating 2.5/5


Youngistaan neither says something new nor does it reinforce time-tested wisdom in a way that you actually want to pay attention to it. Youngistaan was supposed to be a political drama but ended up being a romance for most of the two hours and 14 minutes. It focuses more on the personal life of the Prime Minister instead of his professional one. All in all, Youngistaan makes claims like Modi, implements policies like Rahul and has a persistent cough like Kejriwal, and I certainly wouldn’t vote for it. Rating 1/5


A few scenes do induce some laughter. It’s commendable of director Afzal to have chosen such a bold topic for his debut and manage to extract decent performances from his lead actors, even though they have a long way to go before they are called “good actors”. Also, it was endearing to see a tribute clip to Shaikh on the sets of the film. Youngistaan is a utopian story, at least in today’s context. But if you aren’t really busy this weekend, you can consider heading to this Utopia. Rating 2/5


The political issues highlighted in the film are real and the conclusions offered most times filmi. The film also lacks shades of grey and hence as a political drama, remains somewhat unconvincing. However, with the election fever in the country spreading faster than the plague, a film on a political ideal couldn’t be better timed. It’s an escape but a relevant one. Rating 3/5


Youngistaan is a love story with Indian politics as the backdrop. It's a light hearted film that's not to be taken too seriously and that's the only way one can enjoy this. The production quality of Youngistaan is great and that's one of the biggest aspects in making Youngistaan watchable. The target audience of Youngistaan is the youth and for them this will be an enjoyable ride. Rating 3.5/5


After surviving two disastrous movies this week, Youngistaan was a much settling respite. With a solid script on paper though trivial direction and sloppy execution, the film manages to remain engaging. For the potential the movie had and the passable entertainment it provides, the film is worth the value of the ticket price. If you have time, it wouldn’t be a bad decision to watch it. Rating 2/5