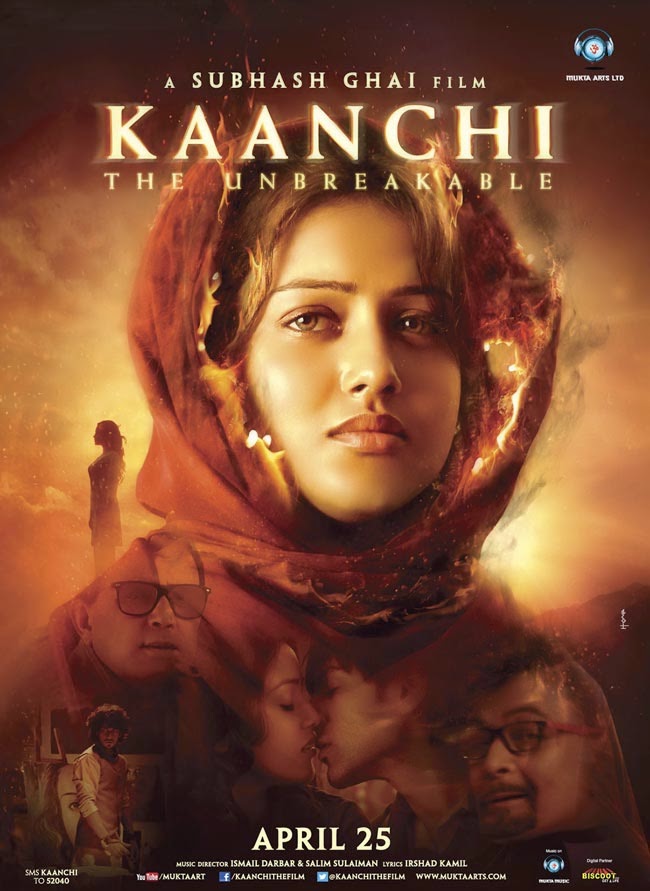 1- Kaanchi Re Kaanchi - (Sukhwinder Singh): A guitar based breezy title track. Starts with sounds of birds chirping and then a voice calling "Kaanchiiiiii". Guitar arrangements are really nice. Kids chorus sounds very beautiful and Sukhwinder's performance is commendable behind the mic. Lyrics are good according to situation. Rating 3/5

2- Tu Sab Kuch Re - (Sonu Nigam, Anwesha Datta Gupta & Ismail Darbar): Starts with the beautiful vocals of Anwesha Datta Gupta, who has been a part of 'Chhote Ustaad'. Her voice resembles Shreya Ghoshal's vocals and is heavenly beautiful. The track is quite engaging mainly because of Sonu Nigam & Anwesha's superb singing. Irshad Kamil never disappoints in romantic songs and this one is not any exception. Music arrangements are mainly good but at the end of the song band baaja sounds don't work at all. Fairly good romantic track. Rating 3.5/5

3- Main Mushtanda - (Mika Singh & Aishwarya Majmudar): The first ever song composed by Subhash Ghai and he has written the lyrics also. Subhash Ghai who is famous for the great music of his films, has managed to disappoint us big time. After listening to the track, we are like, 'Seriously Ghai Saheb?'. Ok, lyrics are cheesy, occasionally vulgar and BAD. The composition is based on dated techno sounds and Honey Singh type of rap. Why has Ghai Saheb chosen Mika Singh instead of Honey Singh for this? Rating 1.5/5

4- Koshampa - (Aman Trikha, Sanchita Bhattacharya, Subhash Ghai & Anwesha): The track starts with 'Sare Jahan Se Acha' tune and then, don't know what we should say. We don't know what song is all about and why 'Sare Jahan Se Acha' tune is used at all. A bad composition which reminds about early 90s bad dance tracks. Nothing is at its place in the track except energetic singing by all reality show singers. Our suggestion is to avoid it. Rating 1/5

5- Kaisa Hai Dard Mera - (Ankit Tiwari): A sad classical based track. It reminds us of Hum Dil De Chuke Sanam though it was far superior than 'Kaisa Hai Dard Mera'. A good haunting tune but at the of the song, the use of drums sounds very weird. The song is soulfully and beautifully sung by Ankit. Lyrics are really good. Rating 3.5/5

7- Thumka - (Sonu Nigam, Suzanne D'mello): It starts with techno sounds and turns into a decent club track. Composition is likeable, but not anything extraordinary. We were expecting something better than that, though the track is not bad at all. Over-processed voice of Sonu Nigam in this track irritates a lot. We love Sonu Nigam's voice as it is. Lyrics are Ok. Rating 3/5

8- Hindustan Kahan Hai - (Sukhwinder Singh, Mohit Chauhan & Raj Pandit): A very patriotic rock anthem. The energetic vocals of Sukhwinder, emotional vocals of Mohit Chauhan and beautiful chorus make the song our pick in this soundtrack. Lyrics are nicely written by Irshad Kamil who has improvised on the lines of Jana Gana Mana and Saare Jahaan Se Achcha. Listen it, feel it. Rating 4/5

NOTE: Well, is Ismail Darbar the same man who composed the soundtracks of 'Hum Dil De Chuke Sanam' & 'Devdas'? Really? It doesn't seem so, and after 'Ram-Leela' soundtrack, not at all. Ismail Darbar used to criticize A.R.Rahman for his tunes, but he couldn't produce even a half of what A.R.Rahman produced for Subhash Ghai's 'Taal' & 'Yuvraaj'. This soundtrack is a shock for us who were expecting something similar, if not better, to Subhash Ghai's previous films.