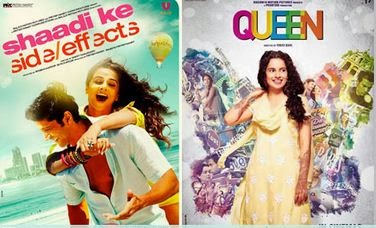 Queen grossed around 1.88 crore nett on its first day. The film only managed to collect at some premium multiplexes of metros and that too as it was stronger in the evening after a dull start.

The film had better collections in Mumbai city, Delhi NCR and Bangalore as the rest of India failed to collect much especially the Central India circuits. The film should manage growth on Saturday but the starting point is low and it will have to have phenomenal gains to make an impact.

Highway which had a similar release as Queen grossed 3.25 crore nett on day one and that was also below the mark. Below is the first day territorial breakdown of Queen:

Shaadi Ke Side Effects fell badly on day eight as it collected around 75 lakhs nett on its 8th day which is a drop of over 85% from its first day. The film will not have been affected much by the new releases as they did not collect much.