After delivering a series of Rs100-crore blockbuster films, Bollywood superstar Salman Khan has come up with yet another Rs150-crore-plus super hit. And this time, it's not a film, but his apparel brand Being Human. The brand , born out of Khan's philanthropic initiative, achieved retail sales of over Rs179 crore in 2013, its first calendar year after launch.

"Brand Salman is a major factor that defines the success story of Being Human clothing. It is his huge following that has driven the sales to such a level in just one year of its launch in India," said Manish Mandhana, joint managing director at Mandhana Industries, which holds exclusive worldwide licence to design, manufacture, retail and distribute the brand.

The royalties received on the sale of this fashion line go to support the education and healthcare initiatives of the Being Human — The Salman Khan Foundation.

While annual sales of Being Human have surpassed box office collections of all Salman Khan films except Ek Tha Tiger, which grossed Rs186 crore, some experts feel the performance of this clothing line is closely aligned to the commercial success of Salman Khan, who has incidentally broken several box-office records in the last three years.

"The brand has to outlive Salman Khan in the long run. It will also depend on how Salman Khan's films fare in the next five years," film critic Komal Nahta said.

Mandhana said the company knows it has to deliver quality to become successful. Salman Khan's loyal fan base could perhaps help initial sales but not repeat purchases if consumers don't find the fit and quality right, he said, adding that the brand has four international designers to ensure top quality and latest style.

"Similar to Zara, which has merchandise on their shelves for less than two weeks, we too have been focussing on fresh fashion to stay relevant for youngsters," he said.

Anupam Yog, director at shopping malls developer-operator Virtuous Retail, counts Being Human as one of the top three performing brands in its luxury and lifestyle mall. "The way Being Human stores are managed in terms of decor and look, it gives a very premium image to the brand which might be helping it generate high footfalls," he said. 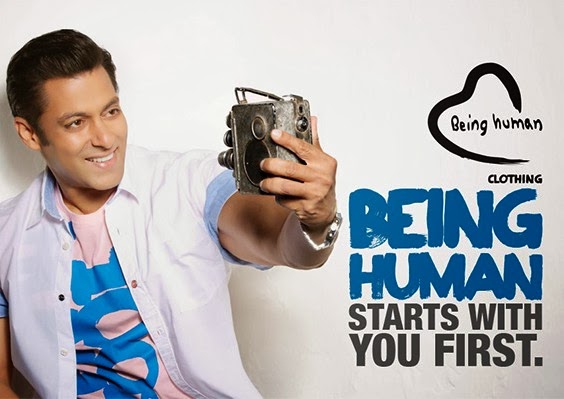 But some analysts warn that its premium positioning could backfire on the brand at a time when consumers are cutting down on discretionary spends. Being Human's basic T-shirt starts at a price point of Rs699, slightly higher than even global marquee brands such as Zara and Marks & Spencer.

Unlike in markets such as the US, where retail shelves are littered with several celebrity brands, such brands are not prevalent in India.