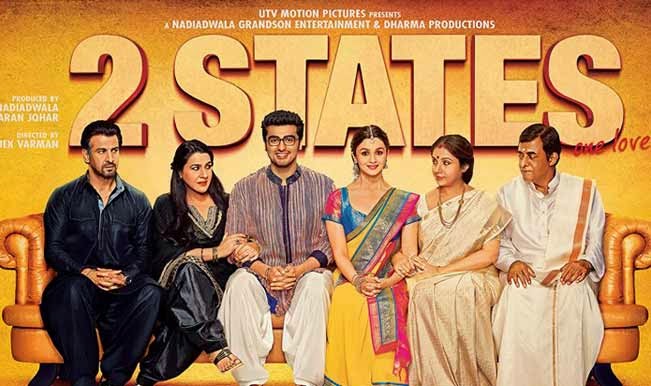 2 STATES is based on Chetan Bhagat's bestseller '2 States: The Story Of My Marriage' Director Abhishek Varman stays faithful to Chetan Bhagat's bestseller, adapting it delightfully on the big screen. The diverse cultures, the discomfort and the pressures when people talk of inter-caste liaison, the unyielding love and the resolve to win the parents' trust... each and every aspect -- the emotions included -- are captured meticulously by the storyteller On the whole, 2 STATES is one of the finest movies to come out of the Hindi film industry of late. This is one of those rare Hindi movies that commands a repeat viewing. Strongly recommended! Rating 4.5/5


2 States is a faithful remake of Chetan Bhagat’s novel and makes for a light, breezy viewing with very few lagging moments in it. If you are in the mood for some solid entertainment, 2 States is the best offering for you this week. Abhishek Varman shows how a rom-com can be done right without ever trying to be attention-seekingly different. 2 States will offend very few and please many. Rating 4/5


2 States, directed by first-timer Abhishek Varman, is a frustrating case of a promising premise that doesn’t fully fructify into a compelling film. Parental opposition is one of the oldest conflicts as far as love stories go. Sure, the culture clash here gives us some genuine laughs. But at 2 hours and 30 minutes, this is a long, indulgent film that wears you out. I’m going with two-and-a-half out of five for 2 States. I’ve never rooted so hard for a couple to get married. If only so I could go home. Rating 2.5/5


In the second half, 2 States falls apart. It becomes more contrived and unconvincingly twisted. At almost two and a half hours, it’s also stretched so thin that by the time Krish and Ananya walk into the sunset, you are long past caring. The story is narrated by Krish to a psychiatrist but at some point the lady disappears. What exactly happened here? I’m still trying to figure it out. Ultimately 2 States is unwieldy and disappointing. I’m going with two and a half stars. Rating 2.5/5


Hate Chetan Bhagat or love him, loath his books or swear by them, but you definitely can’t ignore him and most certainly can’t ignore this delicious movie made with sincere efforts and heart. If you are madly in love, lonely without love or in search of love, you must catch this one, for falling head over the heels for someone is not enough. Sometimes taking a step further to take affection to its logical conclusion- no matter how the odds are stacked – initiates the beginning of a happy ending. For now, it is advisable to enjoy the journey, the process and the mush will follow! Rating 4/5


The unabashed shallowness of a Chetan Bhagat book meets the inane glitter of a Karan Johar-Sajid Nadiadwala production in 2 States. The result is the creation of a third state – the state of overpowering indolence. If the inordinate length of 2 States isn’t bad enough, its soporific tempo certainly is. 2 States is a cross-culture love story that strives to be sweet, funny and emotionally wrenching all at once. It is occasionally funny and sweet in parts all right, but the family drama at the film’s core has a severely stultified feel.2 States is good for a one-time watch. Rating 2.5/5


2 States' romantic angle is a little difficult to connect given the way it is moved along in such a hurry in order to incorporate everything, but the family side of the bargain is truly touching. I ended up crying at least thrice in the film. Nevertheless, there's nothing that should keep you from watching 2 States. If you're as desi as I am and get senti about maa, there's no way you won't run home after watching this film and give your mother a big hug. Rating 3.5/5


2 States is a happy film (with measured anguish). Romance in cross-cultural or even cross-border situations isn't new to Bollywood. What makes 2 States work is the simple narrative told humorously. Adapted as it is, from one of author Chetan Bhagat's best-selling works, the film, just like the book before it, is light-hearted. Chetan's funny one-liners and life-view are studiously borrowed by the director for his screen outing. And though there is a sense of deja-vu, for those who have read the book, the movie still manages to charm and surprise. Rating 4/5


The film sets out to be a solid, emotionally satisfying rom com, and goes well for a bit but then turns into a too-stretched-out ‘jhagda’ between the two sets of North-South parents. And the romance gets short shrift. The smooth, engaging first half descends, post-interval, into mopey melodrama, and I got impatient waiting for the inevitable resolution. Get the outdated folks out of the way, make it crisper, and show us what Krish and Ananya did next. I’m waiting. Rating 2.5/5


The film is based on Chetan Bhagat's novel 2 States. In the story, Chetan Bhagat has successfully shown the forever prevailing differences over caste and religion. The film also reflects upon the classic issue of a youngster-the dilemma over choice of career and parental expectations. 2 States can be a good mirror for parents to understand their children. So take along your parents and enjoy the film. Rating 4/5


Though, you just might complain about the slow pace but it essentially requires you to carry a little patience to grasp the little things. The conversation between them is a bit extended but is necessary. It might sound a bit repetitive in our Indian movies, but social issues like dowry system too carries a place but is given a fresh and amusing take. Rating 3.5/5


The best thing about Two States is that it is fresh -- in the casting, the approach, and the language. It's the kind of romcom that makes you go 'hmmm' rather than 'awwww.' The language spoken by all the characters is no different from one used by everyday people, and it's not like actors saying lines. From the make-out scenes to the fights between the couple, it's all very life-like and non-filmi. The first half is light and breezy and the second dramatic and emotional, perhaps a better balance would have helped the post interval portion which seems heavy. Watch it with friends. Rating 3.5/5


2 States is a feel good, romantic comedy which scores for being earthly and grounded. It is never too candyfloss but even with a known, loved and inevitable climax, Abhishek Varman spins an engaging story. Alia and Arjun’s unfeigned and spunky chemistry is winsome but mostly the film is watchable because of its ability to portray known dynamics of culture divide without many glitches. It is easy, breezy and good fun! Rating 3/5