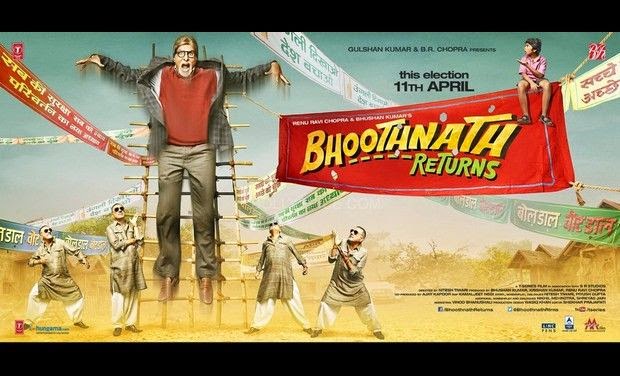 While the first half is breezy, with several pleasurable moments and witty one-liners laced into the proceedings, the film does a U-turn in the post-interval portions. The goings-on, all of a sudden, turn serious, while the humor goes missing. On the whole, BHOOTHNATH RETURNS is made with noble intentions and the message it conveys resonates in the second hour, although those looking for entertainment may find it lacking in the second half. Watch it for some wonderful moments and superior performances by Bachchan Sr., Boman Irani and the child artist Parth Bhalerao. Rating 3.5/5


Bhoothnath could have been a subtle comment of the corrupt world of politics in India with an added dose of dark humour. Unfortunately, it doesn’t reach those levels. But having said that, even when Bhoothnath is not subtle it is a great effort to commercialize an important matter. It is topical and has great performances. Bhoothnath Returns is perhaps better than the first part. Rating 3/5


The film's good bits, however, often feel squashed under the weight of its melodrama and its bloated running time of 2 hours and 35 minutes. There is some lofty sermonizing by at least two different characters, and an over-manipulative song-montage of abject poverty that attempts to squeeze a lump out of your throat. Despite the uneven writing, the film works because it has heart. I'm going with three out of five. Rating 3/5


Bhootnath Returns is unnecessarily bloated. It has far too much sermonizing. The narrative is simplistic and naïve. And yet, I recommend that you see the film - because it’s heart-felt, genuinely moving and for the first half at least, slyly funny. If you are willing to be a forgiving viewer, check out Bhoothnath Returns. It offers smiles and a smidgen of hope. I’m going with three stars. Rating 3/5


In a nutshell, Bhoothnath Returns is a fun, entertaining and engaging drama that has reaffirmed the diktat superstars follow diligently. Never sign on the dotted line for a project that features either a cuddly puppy or an adorable kid. Even the most superlative stars ever walked the earth are reduced to the status of mere props when they share screen-space with those two screen scorchers. Kudos to Bachchan for taking that risk knowingly and yet managing to stand out (tall and impressive) even as the little Parth decided to steal the show. Isi baat par, party toh banti hai, no? Rating: 3.5/5


Tiwari's sequel sets off with a lot of promise, entertainment, laughs and endearing camaraderie between a bhooth and a boy. The first-half has wittily written scenes - strung with satire and emotion, but the story slowly turns into a tedious vocational course on voting. The preaching distracts from some superb performances and inadvertently loses humour, but the story does have its heart in the right place. Rating 2.5/5


Bhoothnath Returns, directed by Nitesh Tiwari -- a follow-up to the 2008 hit about how many faces Amitabh Bachchan could pull -- is about a ghost so fed-up with our corruption and our politicians that he decides to stand for the elections. It’s a cute concept, and our children’s films could certainly use more panache, but while in the hands of a Rajkumar Hirani this idea would have been gold, and made with brevity this could have been another OMG Oh My God, what we’re given turns out to be merely, wastefully exhausting. Rating 2/5


Adapting a socially relevant context and well-meaning theme is commendable but confusing, when coming from a brand associated with a children's fantasy. But Tiwari's script and filmmaking lacks the insight, sarcasm or resolution to make an incisive commentary on the business of politics. Whatever connect the towering Bachchan makes with his viewer is rudely disrupted to accommodate mediocre songs or misplaced sentimentalism in a prolonged slide show of poignant portraits making Bhoothnath's return quite a drag in the end. Rating 2.5/5


The film’s good intentions and the generally competent and controlled execution are marred by a screenplay riddled with inconsistencies. For one, Bhoothnath Returns, directed and co-written by Nitesh Tiwari, is overlong and overstretched. It labours its point about the plight of the poor and the voiceless with the kind of unconcealed zeal that not only robs it of any possibility of achieving subtlety, but also smacks of the hollowness of an election time speech. Rating 2.5/5


The biggest problem with Bhoothnath is its long length of 155 minutes which could have been easily chopped by 30 minutes or so. Not all songs are entertaining but among the ones that you'll enjoy is Party to banti hai. The film also has some interesting message for people to go out and vote and what better timing as it's in the heat of elections in India.There is no doubt that Bhoothnath will entertain cine-goers.. It's entertainment .. Bachchan style! Rating 3.5/5


The impact of the film is diluted by a central confusion in tone: is this a film for kids fronting a bumbling ‘bhoot’ and loveable slumboy, or a tried-and-tested all-too-familiar Bollywood take on let’s-vote-the-bad-guys-out, and make Indian democracy a great place? I laughed out loud in a few bits, didn’t mind some of it, and blanked out in the rest. Finally it was neither funny nor serious enough: neither fully ghostly nor ghastly, but somewhere in between. Rating 2.5/5


If intentions defined good films, Bhoothnath Returns will score full marks. The film’s tempo escalates the interest of the audiences, but scrambles frame by frame in the second half, diluting the impact of its climax. Though quite a watchable film, the lamentable bit is that it had massive potential to be smashing but fails due to the overbearing melodrama. As Big B says in a scene to a fellow ghost about bhoot world, “zyada expect mat kijiyega” fits valid for us. Rating 3/5


The first half is filled with light moments that underline their growing bond and camaraderie. But the film, which is touted as a children’s film, takes on a serious tone in the second half. While the first half is refreshingly devoid of needless drama, director Tiwari makes up for all that lost time. The climax is loaded with melodrama and tears. But the credit has to go to Akhrot and Bhoothnath for making the twists palatable. Watch this for Bhalerao and Bachchan (in that order). Rating 3/5


We would have to wait and see whether the movie makes much of an impact at the Box Office, nevertheless it does have an important message, especially considering the time. It is intentional for sure, but `Bhoothnath Returns` should be watched by children as well as adults; even if the intention is to bring the common man out to vote for a change in the system. Rating 3/5